Whenever funds need to be raised to feed the starving millions, to bring clean water to those without, to build homes and habitats for those in need and to help rescue the victims of natural disasters or famine, one person always seems to be prominent – none other than ‘Sir’ Robert Geldof himself, the original 1970s ‘teenage rebel’.

“I think Band Aid was diabolical… Bob Geldof is a nauseating character. Many people find that very unsettling, but I’ll say it as loud as anyone wants me to. In the first instance, the record itself was absolutely tuneless. One can have great concern for the people of Ethiopia, but it’s another thing to inflict daily torture on the people of England. It was an awful record considering the mass of talent involved. And it wasn’t done shyly; it was the most self-righteous platform ever in the history of popular music.” Morrissey of the British band ‘The Smiths,’ referring to the hit song, ‘Do They Know its Christmas.’

Since then, Geldof and others such as Bono of the rock band U2 have almost made new careers of being figureheads of poverty relief whilst reaping the benefits these events provide them, that is name and face recognition.  For instance, in November 2008, Geldof was paid $100,000 in Australia for a brief speech addressing Third World poverty whilst Bono was recently implicated in a scandal relating to his own charity and its total lack of actual monetary contributions to the causes it is said to support, despite its £12m per annum turnover.

Brian Johnson, lead singer of AC/DC, said that people like Geldof and Bono should dip into their own bank accounts, as do the members of AC/DC and give without publicity, rather than being ‘pop impresarios of poverty’.

Michael Chussodovsky scathingly dissected Geldof’s role in this financial charade, thus… “Most casual observers might assume that the money generated by corporate sponsors, DVD sales, performance royalties and direct contributions would be funnelled into various charitable organizations aiding the poorest people of developing nations around the world. They would be wrong.”

Instead, as Chussodovsky illustrates, the money raised in almost every instance, is used to pay off the corporate creditors of indebted countries. In effect, the entire focus of the money generated by Live8 was to provide direct funds to corporations that were ‘owed money’ by these impoverished nations.

As if that were not sufficiently outrageous, the reality is actually much worse than that.   Those same monetary amounts contributed by Live8 to these private corporations to provide more relief to them for the money they had lent to these impoverished nations was then deducted from the direct aid packages and social service programmes formerly contributed by the G8 to these countries.

As Chussodovsky also clearly states, “For each dollar of ‘debt cancellation’ to the international financial institutions, the G8 will reduce the flow of foreign aid to these countries. In other words, the foreign aid earmarked to finance much needed social programs will now go directly into the coffers of the IMF and the World Bank.”

Moreover, the International Monetary Fund and The World Bank and The African Development Bank never write-off their debts. So what was being promoted and touted around the world as a way to help some of the poorest countries on the planet was actually a covert exercise in paying off international financial institutions for aid they had previously lent these nations, whilst guaranteeing the reduction of the same amount in future funding for these very programmes.

In effect, Live Aid and Live8 were nothing more or less than gigantic propaganda pieces and financial con tricks to repay private institutions and their criminal friends at the IMF and World Bank.  Live8 acted as a direct reimbursement process for the creditors of the poorest countries on the planet, while further binding these countries, their industries and exports, to the future predations of the World Bank and IMF.

This allowed them to impose even more social control on their political processes by insisting on ‘democratic reforms’ commensurate with the same sort the West has imposed on Iraq, Afghanistan and now Egypt and Libya, thereby allowing Western governments to control the election process and the officials who will come to power in these countries while insisting on ‘free market reforms’, all of which does nothing more than to diminish their sovereignty while transferring ever more overt socio-political control to nations outside these countries and the corporate predators that lurk there ever-ready to exploit new markets.  This arrangement also makes it impossible for these countries to default on their debt, perpetually keeping them in the cycle of debt-repayment and financial servitude.

Frauds like Geldof have promoted this Elite, globalist charade, enjoying the fame and royalty income which their appearance on world-wide television provides, whilst at the same time turning a cynically blind eye to the financial sleight of hand going on behind the scenes which does nothing more than to keep these countries and peoples steeped in poverty whilst reducing the social services these countries so desperately need.

Geldof supposedly organised all of the Live8 concerts (the 20th anniversary of Live Aid) in 2005, on his mobile phone. This is a very interesting concept considering the fact that he is supposed to be ‘Mr. Anti-establishment’ and a ‘champion of the poor and hungry’. If that is indeed the case then the question needs to be asked as to how he managed to get several governments to co-operate with him and endorse his plans so easily? Why did these governments not just tell him politely to ‘go away’ or indeed any other two-word phrase with the same implication? Actually, I can almost guarantee that if Bob Geldof really was assisting starving Africans to the detriment of the money-interests in the ways popularly described, then he would almost certainly have ended the same way as John Lennon, JFK, RFK and MLK and others whose motivations were against the best interests of the Elite, let alone being fêted as a saintly figure.

Ever wondered why ‘Sir’ Bob was given an honorary knighthood (as an Irishman he is not entitled to a ‘regular’ knighthood)? Was it for helping the world’s poor and oppressed perchance? Or was it more likely to be for his contribution to the financial bottom-lines of the World Bank, the IMF and the Bank of International Settlements – all run and owned by our Royal and Elite masters? Geldof was used by them as the ‘good guy’ to promote their greed as a charitable event and good old Bob, for his part was only too willing to comply. Did he do it knowingly or unknowingly? Was he paid for his services or did he give all his free time willingly and without thought of remuneration? I know where my vote would be cast on that particular issue. 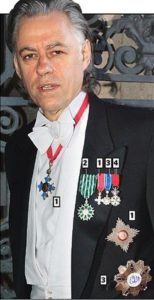 The sheeple, as usual were fooled yet again because they had already been indoctrinated and conditioned into accepting that Geldof possesses saintly qualities and that Live8 was another blow for the poor against their heartless oppressors. There is only one way to prevent a repetition of this scam, for scam is exactly what it is and that is to make sure that we never, ever contribute a penny to these ‘charities’ as doing so I am afraid, will only exacerbate the situation and further contribute to the utter misery being deliberately inflicted on the helpless peoples of the Third World.