Interestingly, in October 1913, in the last days of the Taft administration, the US Congress finally passed a bill legalising direct income tax of the people. This was in the form of a Bill pushed through by Senator Aldrich, which is now commonly known as the 16th amendment to the Constitution. The income tax law was fundamental to the workings of the Federal Reserve Bank because the FRB was a system which would generate an unlimited Federal debt. The only way to guarantee the payment of interest on this debt was to directly tax the people’s incomes, as had been the case in England, with the Bank of England and indeed almost every other country in the world.  The US Internal Revenue Service (IRS) and in England the Inland Revenue, are merely collection agencies for the central bank. The US government obtains its authority to collect income tax through the 16th Amendment, the Federal income tax amendment, which was allegedly ratified in 1913.

“The Congress shall have power to lay and collect taxes on incomes, from whatever source derived, without apportionment among the several States, and without regard to any census or enumeration.”  The 16th Amendment to the Constitution of the United States of America.

Over the years, numerous researchers such as for example, William J. Benson, discovered that the 16th Amendment was never ratified by the requisite 75% of the states and that regardless of this fact, Secretary of State Philander Knox had fraudulently declared ratification. Article V of the US Constitution defines the ratification process and requires a quorum of three-quarters (75%) of the states to ratify any amendment proposed by Congress.

In 1913, there were forty eight states in the American Union, meaning that affirmative action of thirty six of those forty eight was necessary for ratification and in February 1913, Secretary of State, Philander Knox proclaimed that thirty-eight had ratified the Amendment.  This was gross deception of the highest magnitude.  A huge, unjustifiable lie to the people of the US and indeed the world.

In 1984 Bill Benson began a research project, never before undertaken, to investigate the process of ratification of the 16th Amendment.  After travelling to the capitols of the New England States and reviewing the journals of the State legislative bodies, he discovered that many states had absolutely NOT ratified the proposed amendment and continued his research at the National Archives in Washington, DC.  This damning piece of evidence is a 16 page memorandum from the Solicitor of the Department of State, among whose duties is the provision of legal opinions for the Secretary of State.  In this memorandum, the Solicitor listed some of the many errors he found in the ratification process….

The following states are among the thirty eight from which Philander Knox claimed ratification:

California: The legislature never recorded any vote on any proposal to adopt the amendment proposed by Congress.

Kentucky: The Senate voted on the resolution, but rejected it by a vote of nine in favour and twenty two against.

Minnesota: The State sent nothing at all to the Secretary of State in Washington.

Oklahoma: The Senate amended the language of the 16th Amendment to convey the precisely opposite meaning to that intended.

At the end of his project in 1984, Benson had visited the capitol of every state from 1913 and knew that not a single one had actually or legally, ratified the proposal to amend the Constitution.  Thirty three states engaged in the unauthorised activity of altering the language of an amendment proposed by Congress, a power that the individual States do not and have never, possessed.

Since the approval of thirty six states was needed for ratification, the failure of thirteen to ratify should have been fatal to the Amendment. In fact there were only two states that provably, successfully ratified.

It is a little-known fact that the greatest period of economic growth in American history was during a time when there was absolutely no federal income tax.  Between the end of the Civil War (1865) and 1913, there was an economic boom in the United States unlike anything ever seen before or since.

Most people, in all countries, simply assume that there is no other option to an income tax and assume that it has always been with us and that it will always be with us.  Every year, the American people ‘lose’ in excess of $4 trillion in State and Federal income taxes and this figure is equivalent to approximately 30% of all income earned.

But wouldn’t governments suddenly go bankrupt if there was no income tax?  No, actually the truth is that governments had no financial problems at all prior to the advent of an income tax.  In fact, the US national debt for example, has grown 6000 times larger since the Federal income tax and the FRB were created by the corrupted Congress and since then, the dollar has lost 97% of its value.

The Federal Reserve system was actually designed to trap the United States in a debt spiral from which it could never possibly escape, and the federal income tax was needed to greatly expand the size of the federal government and to deprive the American people of the funds necessary to service that debt.  But it does not have to be this way.  America was once much better-off before the income tax and the Federal Reserve were created, and could easily revert to such a system once again.

The Federal Reserve has brought nothing but massive inflation, and much more massive debt not just to the people of the United States, but to the entire world.  In pre-Federal Reserve 1910, the US national debt was $2.6bn yet today it is more than 6,000 times that amount at almost $20trillion (as of June 2017).  That is $20,000,000,000,000! Combined with the other bankster-owned central banks of the world, we can only wonder what all that stolen money and all those illegal taxes could have done to benefit mankind in general instead of the tiny minority who keep it ALL for themselves.

What you are about to read should absolutely astound you.  During the last financial crisis, the Federal Reserve secretly conducted the biggest bailout in the history of the world and fought in court for several years to keep it a secret.  We can all remember the TARP bailout, and the American people were absolutely outraged that the Federal government spent $700bn bailing out the ‘too big to fail’ banks.  But that bailout was pocket change compared to what the Federal Reserve did.

The Federal Reserve actually handed more than $16 trillion in almost interest-free money to the ‘too big to fail’ banks who had been placing ‘no lose’ bets on the markets between 2007 and 2010.  But of course this is never reported in the bankster-controlled mainstream media.

This is an astonishing amount of money… 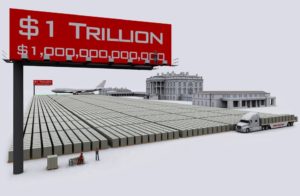 The above represents one-twentieth of the US national debt (owed to the Fed, not the government)

It is also put into sharp perspective by noting that the entire GDP (gross domestic product), in other words all the money generated in the United States for the entire year of 2010 was only $14.58 trillion.  But, according to the GAO audit, $16.1 trillion in secret loans were made by the Federal Reserve between December 2007 and July 2010.

The following list of banks and the amount of money that they received was taken directly from page 131 of the GAO audit report:

Not only did the Federal Reserve give $16.1 trillion in virtually interest-free loans to the ‘too big to fail’ banks, the Fed also paid them over $600 million to help run the emergency lending program. According to the GAO, the Federal Reserve shelled-out an astounding $659.4 million in ‘fees’ to the very financial institutions which caused the financial crisis in the first place.

If the FRB can afford to ‘lend’ more than $16tn to all the other parasites in the financial system, how much ‘money’ do you think they actually have in their possession in total?  This is obviously not public domain information but my guess would be ‘considerably more than actually physically exists in the entire world.’  But of course we already know now that most ‘money’ exists only theoretically anyway.

So as is now evident, the ‘licensed to steal’ bankster-run central banks routinely bail out their member banks and their friends, but the taxpayers always get presented with the bill. A bill commonly known as the ‘national debt.’  Except in reality, there is no national debt. It is all an illusion, a massive fraud but the banksters down the centuries have brainwashed us all into thinking it is REALLY owed to them.  It’s a huge lie.

Here is an amusing, fictional anecdote, courtesy of my friend Pat Shannan, that illustrates just how much of an illusion it all is:

“It is the month of August; a resort town sits next to the shores of a lake.  It is raining, and the little town looks totally deserted.  It is in the toughest times since 1934, everybody is in debt, and everybody lives on credit; mostly from each other.

Suddenly, a rich tourist comes to town. “Oh boy!”  Everyone says to themselves when they spot his limousine.  “How long can we keep this rich guy in town?”

The limo stops, the back door opens and the bigshot enters the only hotel.  He drops a 100-dollar bill on the reception counter, and asks to inspect the rooms upstairs in order to pick one he might like.

It all happened in less than 10 minutes, and the hotel proprietor promptly placed the 100-dollar bill back on the counter so that the rich tourist would not suspect anything.

And it was just in time, too, because only a moment later, the rich tourist came down after inspecting the rooms, picked up his 100-dollar bill, remarked that he did not like any of the rooms, and left town.

No one earned anything.  However, the whole town was suddenly without debt, and was looking to the future with a lot of optimism.

And now you have seen a quick snapshot of how the federal government, via the handy Federal Reserve credit machine, operates in our society.  Pat Shannan, ‘Everything They Ever Told Me was a Lie.’ 2010.

The banksters certainly do not have to point a gun at us to get our money.  As they own the law and everything else besides, we pay them out of fear of the consequences of non-compliance!