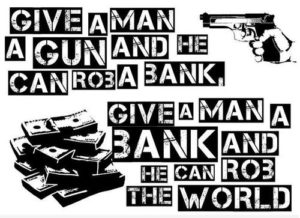 The premise of all bank loans should be that the bank has a sum of money in reserve and therefore available to loan and assuming you qualify as a borrower, then the bank will loan you money as long as you contract to repay it plus a fee (interest.) In order to ensure that the bank does not lose its money, the banksters will ask for beneficial interest (ie. ownership) in your property which is used as collateral for the loan, until the contract is fulfilled (the loan is fully repaid.)

This is how most of us are led to believe that any bank loan/mortgage transaction works, but unfortunately this is untrue. It is pure fantasy in fact.

Firstly, the bank does not care much if you qualify, when you can offer tangible property as collateral because they know that mathematically they will foreclose on a certain amount of property without having risked anything to acquire it, and this adds significantly to their bottom line. But they promote and maintain the illusion that the borrower ‘qualifying’ for credit is important, because this conceals their real activities.

Secondly, once a potential borrower has been approved, nothing then happens until he signs a ‘promissory note,’ usually in the form of a loan application form and returns it to the bank/building society.

But, how does the bank actually reflect this ‘loan transaction’ in its books? The borrower’s note is deposited as an asset of the bank and is credited to the bank’s asset base but according to the rules of double-entry bookkeeping, the bank must now also enter a debit entry to offset its credit entry thus ‘zero-ising’ the transaction. The account being debited is the bank’s own ‘chequing account,’ or demand deposit account and in bookkeeping terms a debit is a liability. (Remember this important point, I will return to it shortly.)

Then, what the bank actually does is to deposit this ‘promissory note’ as ‘money’ on its books and they then transfer this ‘money’ into the bank’s own account as if it were their own and they do so without the customer’s permission. It is from this chequing (demand deposit) account that the bank then transfers the loan to the borrower. This is palpably fraud and common criminal conversion.

The next thing to recognise is the fact that the bank deposits the borrowers’ note as ‘money’ on its books. They transfer that same ‘money’ to another account and then return it to the borrower in the form of a bank transfer.

But, when we borrow money, do we not assume that we are borrowing the bank’s money and not our own? We do indeed, but we are wrong, very wrong. We are being deceived. Not only are we being hoodwinked with deceptive and misleading advertising… ‘Mortgages available here,’ but they are also accruing interest from loaning a borrower his own money and forcing him to risk his own collateral for the privilege!

But, I hear you exclaim, ‘This cannot be true. Our governments would never allow this fraud to continue.’ Unfortunately you would be wrong. This scam has been perpetuated for centuries, with no legal or governmental interference whatsoever.

In fact, the Federal Reserve, representative of ALL banksters tells us bluntly and unashamedly how this fraud works in their own publication entitled, ‘Modern Money Mechanics,’ which is still (at the time of writing,) available online, here…

They have no shame at all about their banking practices, knowing that not even sadly mis-informed, professional economists will question their methods, as is exhibited by the following excerpts from that publication:

“What Makes Money Valuable? In the United States, neither paper currency nor checking and savings deposits have value as commodities. Intrinsically, a dollar bill is just a piece of paper, deposits merely book entries. Coins do have some intrinsic value as metal but generally far less than their face value.

What then makes these instruments – checks, paper money, and coins acceptable at face value in payment of all debts and for other monetary use? Mainly it’s the confidence people have that they will be able to exchange such money for other financial assets and for real goods and services wherever they choose to do so.”

And it gets even worse…

“Who Creates Money? Bankers discovered that they could make loans merely by giving their promise to pay (liability in the form of a check from a debit ‘DDA’ account) or bank notes (Federal Reserve Note) to borrowers. In this way, banks began to create money. More notes could be issued than the gold and coin on hand because only a portion of the notes outstanding would be presented for payment at any one time. Enough metallic money had to be kept on hand, of course, to redeem whatever volume of notes was presented for payment.”

Transaction deposits are the modern counterpart of bank notes and it was a small step only from the printing of notes to making book entries crediting the deposits of borrowers to the bank’s own accounts and which in turn could be ‘lent’ back to the borrowers, thereby in effect, printing their own money.

So, the Federal Reserve admits openly that the borrower creates his own money by depositing his note with the bank, so they are in effect lending money that does not belong to them and indeed does not exist. That ‘money’ / ‘credit’ is actually only ‘created’ by the signature of the borrower on his / her loan agreement.

The Federal Reserve (on behalf of all banksters, everywhere,) also informs us that the banksters make loans by giving their promise to the borrower (liability.) But this promise can never be paid.

The banksters make a transfer or write a cheque to the ‘borrower’ which can only be cashed in their own, worthless paper money, but paper money, dollar bills, five-pound notes etc. is nothing more than a promise to pay, in effect meaning that a bankster’s promise to pay is only redeemable by the bankster’s promises to pay. Paper money is no longer redeemable in anything of value by any bank so all we can expect from them is a promise to pay – which of course never does get paid – a liability that is passed-on but never settled.

The borrower assigns his property, a tangible asset of value as collateral to the banksters and signs a contract to pay the banksters back in assets, the hard earned fruits of his labour over many years, and all he receives in return is a liability. The banksters never had any money to loan the borrower in the first place, instead loaned him money that he, himself had created… his own money! And then, in the case of a 30 year mortgage, the borrower is committed to paying the banksters three times the amount he loaned to himself. Where is the banksters’ risk?  What did the bankster do to earn 30 years of his labour?  What did the bankster do to earn the right to steal the house from his family if he is made redundant, after making the ‘loan’ repayments faithfully for twenty years but now cannot make a few payments? Nothing at all.

Now let’s examine this quote from ‘Modern Money Mechanics’… “…only a portion of those notes outstanding would be presented for payment at any one time.”

This is absolutely false and misleading. The banksters now are dealing in banknotes which are non-redeemable, period. If you do not believe this, try taking one into any bank anywhere and ask them to redeem your £10 note / $10 biII. All you will be offered in exchange is more notes/bills or equally worthless coins representing the same value. Originally ‘one pound’ represented one pound of silver (sterling) but now one pound is only worth whatever the banksters themselves, deem it to be worth.

Ever thought you may be in the wrong business? The banksters have perfectly ‘legal’ liens on everyone’s property, homes, cars, incomes etc., without ever having to risk a penny of their own and better still they know that their worthless bank notes can never be redeemed for anything of substance either! You or I would quickly be behind bars, sewing mailbags if we tried to promulgate this scam of all scams

And this one… “…it was a small step from printing notes to making book entries.”  Money is nothing more than bookkeeping entries made by the banksters after they lock-in the borrower’s collateral and promise to pay. They know that since they only created the principal amount of the loan in new ‘money’ and the money to pay the interest on all of their loans is never created. Then, by simple mathematics some people are guaranteed to renege on loan repayments and thereby will they acquire their collateral, the borrower’s property, free and clear through foreclosure.

Since the borrower is, in effect printing (figuratively speaking) and borrowing his own money, the banksters are nothing more than paper-shufflers who will collect their collateral without risk on their part.

So, if a borrower actually creates money via his promissory note, that is, his signature on a mortgage agreement, could he not discharge his liability with another note, which is the current medium of exchange? In fact, this has been done in a few instances, but the banksters in collusion with their friends in the court and legal systems, have now put steps in place to counter this in every possible way, using their immense wealth to facilitate the blocking of these activities as per my comments in the ‘foreword’ to this book… https://www.amazon.co.uk/Behind-Curtain-Chilling-Banking-Industry-ebook/dp/B01GTVI0Z0/ref=asap_bc?ie=UTF8

Put another more simple way, this process requires exactly the same set of bookkeeping entries that would occur in the event of a burglar stealing your property and then returning that stolen property back to you, and claiming it to be a ‘loan’ and you then being legally obligated to repay both the principal and interest accrued to the thief.

All banksters should be charged, arrested and tried for these crimes; and banks’ boards of directors should be the co-defendants in a civil, class-action suit brought by every homeowner that has ever been drawn into this fraudulent financial trap.

“The real truth of the matter is, as you and I know, that a financial element in the large centres has owned the government of the US since the days of Andrew Jackson.” Franklin D. Roosevelt in a letter written 21st November 1933 to Colonel E. Mandel House

But it gets worse, much worse. The above is only the platform upon which the banksters’ real, heinous crimes can begin…