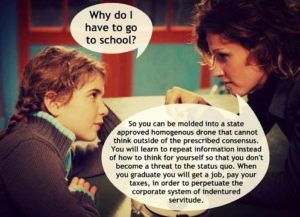 Education or more specifically further education or tertiary education is now being used as a cash-cow both for governments and for the banksters who enslave us, alike.  Here is the gist of the plan:

Step 1.  Ensure that the benefits of a University or college education are aggressively ‘sold’ to the public by the expedient of substantially increasing the criteria by which candidates qualify for jobs in the first place.  ie. Ensure that more and more jobs can only be performed by ‘graduates’ thus dramatically increasing the uptake of University and college places.

Step 2.  Lower the standard of examinations to ensure that more and more students pass them and thus qualify for tertiary education.

Step 3.  Gradually, in a series of small steps, increase tuition fees and thus by default the amount of money that needs to be borrowed by students in order to complete their courses.  Significantly in Britain in 2011, tuition fees tripled literally overnight, thus ensuring that student debt to the bankers becomes an almost intolerable burden.  Indeed, in the future, some students will never be able to pay back these manufactured debts, unless they opt for the right debt agreement plan.

The effect of this is that many students, whether or not they actually graduate, will have debt burdens exceeding £100,000, before they start in employment and attempt to obtain mortgages.  If repaid over 30 years, this debt represents a £500,000 windfall for the banks (per individual student) and in the event of default, even more.  As a result, once entrapped in this way, escape will be nigh on impossible, the bondage will become permanent and future lives and careers will be impaired or ruined, before they even start in many cases.

In Britain at least, there is currently a moratorium on repayments before a certain age and/or income level is attained, but not so in the US where Congress ended bankruptcy protections, refinancing rights, statutes of limitations, truth-in-lending requirements, fair debt collection and state usury laws when applied to federally guaranteed student loans. As a result of this abomination, lenders may freely deduct from salaries, income tax refunds, earned income tax credits, as well as Social Security and disability income to assure defaulted loan payments.  In addition, defaulting may cause loss of professional licenses and status, making repayment even harder or impossible.  How long before this insidious state of affairs comes to pass elsewhere, do you suppose?  My guess would be ‘fairly imminently’, to be frank.

In all our major towns and cities the most predominant building work being undertaken is often that of new student accommodation facilities, which seem to be constantly springing-up wherever there is a college of further education or a university.  These student accommodation companies are all directly owned by the ‘big banks’ and thus by the banksters who run them.  To my mind this speaks absolute volumes about the motivations behind this engineered education revolution.

As a result of all the above, for many people, permanent debt bondage is assured.  In addition, no appeals process allows determinations of default challenges under a process letting lenders rip-off borrowers, often in perpetuity.  The truth is that there now exists a conspiratorial alliance of lenders, guarantors, servicers, and collection companies enriching themselves hugely at the borrowers’ expense, thriving on extortionate fees and related schemes.  It is essentially a government-sanctioned racket, scamming millions of indebted victims.  Lenders thrive on bad debts, deriving income from inflated service-charges, default and collection fees.  Today we have created a paradise for the unscrupulous lenders as default rates soar and people begin to drown in debt and student loans have become a dramatically increasing percentage of that overall debt.

“If you have a lot of people finishing or leaving school [entrapped in] debt, their choices may be very different than the generation before them.  Things like buying a home, starting a family, starting a business, saving for their own kids’ education may not be an option if they’re trying to repay student debt. There’s much more awareness about student borrowing than there was 10 years ago.  People either are in debt or know someone in debt.”  Lauren Asher, President of the Institute for College Access and Success

Many of them have their own personal horror stories about how predatory lenders, servicers, guarantors, and collection companies rip them off under a totally escape-proof system.  In fact the entire scheme amounts to nothing more or less than legalised theft and enslavement, in fact in much the same way as the banksters treat their investors and steal from them with impunity.

“About two-thirds of the people I see attended Universities.  Most did not complete their programme, and no one I have worked with has ever gotten a job in the field they were supposedly trained for.  For them, the negative (debt default) mark on their credit report is the number one barrier to moving ahead in their lives.  It doesn’t just delay their ability to buy a house; it gets in the way of their employment prospects, finding an apartment, almost anything they try to do.” Deanne Loonin, National Consumer Law Centre attorney

Western society today is characterised by a combination of rising prices, rising poverty, unemployment, mortgage foreclosures, homelessness, hunger, student debt entrapment and despair, completely mocking the notion of a fair and equitable society.  Instead we have a corrupt political duopoly sucking public wealth into the already-bulging coffers of the super-rich, neglecting public want and needs, waging permanent war and driving other nations down the road of permanent war leading to tyranny and ultimately, ruin.  Anyone attending a college or University in an attempt to ‘get ahead’ of the rest in the labour market will unfortunately be several years behind those who go directly into a job from school and what is much, much worse, will no doubt be in extreme debt until old age.