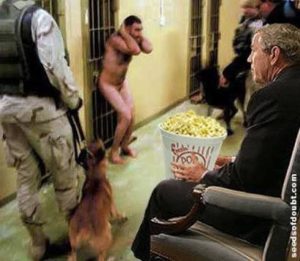 The world rattles on while Israel’s proxy army known as the U.S. military murders dozens of people every day in places so far away they are beyond the comprehension of the average working American who consumes his time with inconsequential personal enrichment schemes that often involve quasi criminal techniques which often ruin the lives of others.

Third World nations are falling like dominoes to the neocon monstrosity, which devours its own citizens almost as fast as it obliterates distant countries. Any resemblance to the “domino theory” about Communism during the brutal reign of the Soviet Union is not purely coincidental.

It has become so easy and profitable to wreck other countries who won’t sign onto the Jewish world financial agenda. From there, it was only one small step for the American military to refocus its malicious intent upon its own people, with the ultimate goal of controlling every single person on the planet, Americans first.

Some would say — through propagandized schools, media and entertainment — this has already happened.

How else can we explain the sullen succession of presidential clones all regurgitating the same schizophrenic message — it’s OK to trust the bankers even though we know they’re stealing from us.

The clamoring of Bernie Sanders’ cult worshippers about the election of Donald Trump has that same kind of passionate ignorance that young devotees of communism evince on college campuses, without ever having learned that Soviet communism slaughtered one hundred million NON JEWISH humans in its nightmare pursuit of a Jewish heaven on earth feeding upon the corpse of Russia.

Throughout the world and from behind the scenes the Jews have trampled upon the world with a vengeance beyond all rationality.

Today the same maggots have eaten away at the innards of the United States. They have captured the minds of all Americans by their insidious monopolization of media, made possible by their unrestricted control of the money supply. And they have taught us that it was very stylish to be unreflective and self-destructive robots.

The Jewish spawned Frankfort School of so-called psychologists taught many generations of American children to hate their own families for their oppressive beliefs. These beliefs were the psychological glue that held nations together.

There was never a republic on the American continent. The banks always determined the chains that bound us, simply by buying politicians and owning all the newspapers. It was always about what the banks permitted. Nothing has really changed.

The degradation of the America mind is so acute for the past hundred years people have failed to see that what has been promoted by the mass media has been largely false, deliberately designed by and for the financial moguls who owned the newspapers rather than for the people who read them.

The fact that Abraham Lincoln said they were in his canonized Gettysburg Address was perhaps the first step in the overthrow of the American republic.

The forced equality of inferior minds has damaged the American educational mission beyond repair. Once it was a tool for enlightenment; now it has become a choice of what military support mechanism do you wish to pursue? Scientific research has become totally skewed in pursuit of weapons applications despite the visible risks and the questionable rewards that almost always complicates stealing from others.

Any trace of morality in an American leader has always been remedied by assassination.

Christianity had gained its ascendance over the minds of humanity in much the same way, by promising deliverance from pain and forgiveness for past crimes, and undermining the formula of the Roman Empire in which every citizen was a soldier.

Yet as the centuries passed, the majority of the army became composed of people from other countries whose allegiance was to leaders who promised them fortunes rather than to the community they had pledged to defend.

Hell, if they can get away with 9/11, they can get away with anything, put anything over on a nation of dummies, of intellectually challenged individuals who are the products of the totally misguided American school system and then brainwashed throughout their lives by uninterrupted doses of artificial reality, where the world is kept in constant fear by a government so desperate to prove it is needed to protect us that it invents its own terror threats.

The government’s philosophy is to put us in jail to protect us — so we will never present a danger to its hegemony. That’s why they’re flooding white countries nonwhite immigrants, to force prison conditions on the chaos that is inevitably resulting.

Just another classic strategy by the alleged humans who invented the Jewish destabilization template, which is guaranteed to destroy every country it infects with its homicidal mania and unquenchable penchant for swindling.

What kind of demented bureaucrats would slaughter 3,000 of their own countrymen simply for geopolitical objectives, and the fabulous profits of worldwide commerce in drugs, oil and weapons. We know who most of these people are? We allow them to walk among us unmolested.

Could these people all have had bad parents? These things make you wonder about how civilized is the civilized world? Do we need to be restrained? Can we ever be allowed to be free?

When Trump’s righthand mad marine spews from the podium about American exceptionalism I think it means anyone can be killed for any reason simply by declaring them a potential terrorist for disobeying the pronouncements of an utterly corrupt government.

Like so many other things, it makes me shiver.

The sheer ugliness of American behavior in the world in recent years has confounded many American patriots who realize they have been supporting criminal garbage who continually betray their own people for profit, no matter how immense the carnage or how indefensible their lies.

• Gassings of 200 Syrian children and then displaying them in a gym for photos, blamed on Assad but carried out by U.S. supported jihadis, a classic example of the media working hand in hand with the military, both driven by demonic politicians intent on destroying Syria for Israel, all for a stupid oil pipeline.

• Murdering two million defeated and defenseless German soldiers in a field in France — the Rhine Meadows massacre — never reported by mainstream press. Perhaps the No. 1 source of twisted Jewish glee ever produced.

• Buying the Ukrainian revolution for $5 billion and hiring mercenaries to shoot people from both sides in order to stimulate a phony revolution that immediately began slaughtering Russians who didn’t go along with the plan.

(Face it! Obama has been trying to start World War III at the behest of his Jewish paymasters.)

• Assassinating doctors for curing cancer that the pharmaceutical industry does not want cured.

• Giving smallpox blankets to Indians who taught the Pilgrims to avoid starvation by planting corn. Get it? The Indians saved the Pilgrims, and the Pilgrims murdered them.

Could this have been the template all American behavior that followed? The list of these stupendous moral infractions is, as you know, endless.

Except we must take note of the current pedophilia revelations now being unearthed involving the highest levels of Washington society that have persisted for decades. This would be the most jarring example of the subhuman nature that now infects every maneuver by a clearly perverted Obama administration, but also Washington society in general. War mad perverts, you might say.

If the objective of seeking power is to rape and murder children, we must ask ourselves what is the purpose of our lives.

The younger generations are lured away from their parents by trends designed to addict them to damaging pastimes and derail any ideas they might have had about how the world is really run.

You can control their educations so they can only rise to a certain level, far below the level needed to perceive the scams that limit our freedom and damage our health.

Throughout the 20th century, Americans have been unable to perceive the swindles perpetrated on them by the Jewish bankers and their hired politicians.

Generations have been bamboozled by the Jewish press, which explains away the financial crimes and enflames he population to go and kill some designated enemy for some totally fallacious reason.

Will we ever have a leader who can be candid?

Or will we keep on prattling until we kill each other off?

If Donald Trump has come to give us the peace of the Jews we’re no better off than we were before.

Remember the subhuman drecks who attached wires to people’s genitals in Abu Ghraib prison . . . those orders came right from the top.

We can no longer believe our government when it says it has identified an enemy.

It cannot tell the difference between an enemy and a potential victim of crime.

What it calls an enemy is all too often the next victim of its outrageous crime.

The criminals who are our bankers, presidents, generals and editors can justify anything that makes them richer.

And it so happens that is exactly the behavior that makes the world inestimably poorer.

Change this system or watch the world go up in flames. Some say it’s too late, and the final fire season is already here.

This is our subhuman nature. Most people don’t realize any of this. And worst of all, don’t care who we kill.

And we should never stop working to make the world the way we want it. Enough of this Jewish slave colony.

John Kaminski is a writer who lives on the Gulf Coast of Florida, constantly trying to figure out why we are destroying ourselves, and pinpointing a corrupt belief system as the engine of our demise. Solely dependent on contributions from readers, please support his work by mail: 6871 Willow Creek Circle #103, North Port FL 34287 USA.