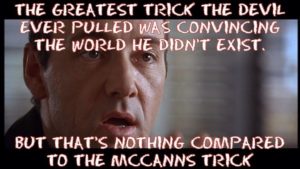 It would appear obvious to anyone with even a semi-functioning brain that Gerry McCann with his known direct or indirect links to Gordon Brown had either some sort of ‘hold’ on Brown and/or he was calling in favours in return for a massive high-level cover-up of what really happened. Brown of course is suspected to be up to his obnoxious, sickening, flabby neck in the ongoing paedophile scandal. Also, how co-incidental is it that one of the McCann’s ex-friend’s revealed that they had on a previous holiday, accidentally overhead and saw McCann and Payne (one of the ‘tapas 9’) making lewd and inappropriate comments and hand gestures when discussing Madeleine, who at the time was only 18 months old? And how unsurprising that when this person, a well-respected doctor, immediately contacted the police when she discovered Madeleine’s ahem, ‘abduction,’ that her evidence was totally buried and ignored?

As for the innocent victim in all this, little Madeleine, as the cadaver sniffer dog episode, would tend to suggest, it is almost 100% certain that she is dead and indeed was dead right from the off and all the ongoing utter bullshit about spotting suspects and speculation as to where she may now be is just disingenuous cold, calculated hype to deflect the masses away from the guilt of the McCanns.

So what did happen to Madeleine? The absolute truth may never be known, but was she murdered or did she die in some sort of physical accident, falling from the window etc.? Or almost unthinkably, did she die under other circumstances that I will not describe as it actually turns my stomach to even contemplate it, let alone write about it?

Had it been a pure accident such as falling from a window, down the steps or from the small balcony, why would there have been any need to cover it up except perhaps for the fact that the parents may have been scared of being accused of negligence having left three very small children unattended for long periods of time – despite the fact that they were on the same site – albeit a good walk away? Indeed thinking about it – why were they not accused of negligence in any case, whether or not one or both of them were involved directly in her death / abduction? (delete as applicable). Had that been any one of us, we would have been subjected to some pretty intense scrutiny from the SS when we arrived home, I’m sure.

So that apart, this leaves the other two options. I cannot particularly see any reason why they would have deliberately murdered her, but who knows really? Anyone who could go to the absurd and truly unbelievable lengths that they have for the past 9 years to cover their tracks, one could reasonably argue, is capable of anything. But anyone who can actually pull-off the hoax / scam that they have, with all its attendant mental stress and inordinate pressure, surely has to be a clinical psychopath and so maybe there is the answer.

But, I believe on balance that sickeningly, this leads to one conclusion only (in my humble view) and as I say I cannot quite bring myself to type it.