The story contained within Anne Frank’s diary, that world famous testimony to the sufferings of a Jewish family during World War II, may or may not be a true story as far as it goes (we will never know for sure), but it is one hundred percent certain that the diary that was published and subsequently became a worldwide best seller was not written by Anne Frank herself. 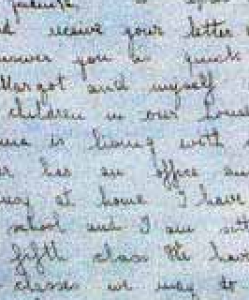 Anne’s letter to an American pen-pal 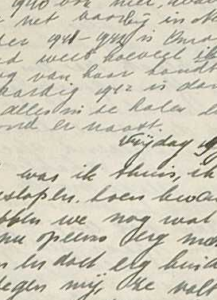 Of the above examples of Anne’s handwriting, the first example was written to an American pen friend who introduced the letter to the world after Anne had become posthumously famous and recognised the name – and the other is supposedly taken from the pages of Anne’s diary, purportedly written shortly after the first sample.

Now, I would be the last to admit to being a handwriting analyst but there can surely be no doubt that those two samples were written by two completely different individuals. I do not believe it possible that one’s handwriting could change that much over an entire lifetime let only in someone of poor Anne’s tender years. And just to further prove the point, it is strange is it not that the latter example purporting to be her original diary is written in ballpoint pen? Ballpoint pens were invented by a Hungarian by the name of Laszlo Biro in the mid-1940s and most certainly did not become commercially available until well after Anne’s death at Bergen-Belsen concentration camp from typhus at the age of fifteen in 1945.

‘The Diary of Anne Frank’ was first published in 1952 and immediately became a bestseller. It has been re-published in paperback, with over 40 printings and it is impossible to estimate how many people over the last 50-60 years have been touched and moved in some way by the subject matter.

An interesting question to consider is why the trial involving the father of Anne Frank, bearing directly on the authenticity of this book has never been officially reported by the overwhelmingly Zionist media? But I think we may all guess the answer to that?

In royalties alone, Otto Frank profited greatly from the sale of this book, purporting to depict events in the tragic life of his family, but is it fact, fiction or propaganda or a combination of all of these?   It certainly claims to be the truth but to what degree does it appeal to the emotions through misrepresentation? It was certainly convenient for Otto Frank that he was the only family member to survive the war – and I mean that in the sense of there being no-one left alive to corroborate or deny the story and in no way to diminish the anguish he must have suffered at the loss of his entire family.

School-book publishers have promoted this book for young people for many years, presenting it as the actual work of Anne Frank. Advertising in advance of the release of the movie certainly promoted the drama as being factual but do not writers of such editorials and promoters of such advertising in this way, keep alive the prejudices and hatred they profess to deplore and could this be the actual objective?

The Franks were upper-class German Jews, both parents emanating from wealthy families. As children, Otto and his siblings lived on the exclusive Meronstrasse in Frankfurt and Otto attended a private preparatory school and also the Lessing Gymnasium, the most expensive school in Frankfurt. Upon leaving school, Otto attended Heidelberg University from whence he eventually graduated.

In 1925 Anne’s parents married and settled in Frankfurt, Germany where Anne was born in 1929. The Frank’s family business included banking, management of the springs at Bad Soden a famous spa and the manufacture of cough sweets. Anne’s mother, born Edith Holländer, was the daughter of a wealthy manufacturing family and in 1934 Otto and family moved to Amsterdam where he bought a spice business, Opekta, which manufactured pectin, a form of gelatine used in the making of household jellies.

In May 1940, after the Germans occupied Amsterdam, Otto remained in the city and he and his company entered into a lucrative contract with the German Wehrmacht, whilst his mother and brother moved to Switzerland to escape the German occupation. From 1939 to 1944, Otto sold pectin to the German army to be used as a food preservative, a disinfectant balm for wounds, a thickener for increasing blood volume in blood transfusions and also as an emulsifier of petroleum to be used in the manufacture of fire bombs and flame-throwers. However, by supplying the Wehrmacht, Otto Frank became, in the eyes of his Dutch friends and neighbours, a Nazi collaborator. None of this aspect of the official story of course is ever mentioned or even alluded to.

On the 6th July 1942, Otto allegedly moved the entire Frank family along with two family friends into the so-called ‘secret annex’. The annex was within a three storey townhouse that shared a garden park with fifty other apartments facing inwards to form an approximate square, but was not visible from the street. Whilst allegedly still in hiding, Otto Frank continued to manage his business, venturing downstairs to his office at night and at weekends. Anne and the others would also periodically go to Otto’s office and listen to radio broadcasts from England.

The purported diary begins on 12th June, 1942 continuing through to the 5th December 1942. In addition to this first diary, Anne also supplemented it with personal letters. Otto said Anne heard Gerrit Bolkestein, a Dutch broadcaster, in a wireless programme ask his listeners to keep a diary and he would publish it after the war and that is why, Otto claimed, she rewrote her diaries for the second time in 1944. In this second edition, the new writer, Anne or whoever it was, changed, rearranged and occasionally combined entries of various dates.

Anne’s re-hashed diaries were written in ball-point pen (confirmed in Otto Frank’s court hearing) which was extremely enterprising of her since such a device did not exist in 1944 and also the diary was written with literary standards well surpassing those of which even the brightest of fourteen year old children would be capable, reading more like a professionally written documentary than a child’s diary.

In 1944, the German authorities in occupied Holland discovered that Otto Frank’s company had been extensively defrauding them through their Wehrmacht contracts and subsequently the police then raided his offices where during a thorough search the annex was discovered and the eight occupants were sent initially to the Westerbork transit camp and forced to perform manual labour. Otto was later sent to Auschwitz and Anne, her sister Margo and her mother subsequently died in one of the frequent outbreaks of typhus in Bergen-Belsen two weeks before liberation by the Allies.

In 1945, after being liberated from German custody, Otto returned to Amsterdam, where he claimed he found Anne’s diary cleverly hidden in the rafters of the annex. However, another version of the story tells of a Dutch friend, Meip Geis finding Anne’s diary whilst caretaking the building in the Franks’ enforced absence, which she then gave to Otto Frank upon his return. Otto took what he claimed were Anne’s letters and notes, edited them into a book, which he then gave to his secretary, Isa Cauvern to review. Isa Cauvern and her husband Albert Cauvern, a writer, subsequently authored the first version of the diary.

Upon submitting the diary for publication, questions were raised by some potential publishers as to whether Isa and Albert Cauvern, who assisted Otto in typing out the work, used the original diaries or whether they took it directly from Mr. Frank’s personal transcription, but it is known for certain now that the American author, Meyer Levin wrote the third and final edition which became the finished end-product. Meyer Levin was a Jewish author and journalist, who lived for many years in France, where he met Otto Frank around 1949.

If ever file number 2241-1956 in the New York County Clerk’s office is opened to public view (highly unlikely I surmise) and its contents widely publicised, then the true nature of this work will be exposed for all to witness. Misrepresentation, exaggeration and falsification has too often coloured the judgment of otherwise decent people and if Frank used the work of Meyer Levin to present to the world what we have been led to believe is the literary work of his daughter, wholly or in part, then the truth should be exposed. To label fiction as fact can never be justified nor should it be condoned.

Otto sued two Germans, Ernst Romer and Edgar Geiss in 1980 for distributing literature denouncing the diary as a forgery. The subsequent court case produced a study by official German handwriting experts that determined that everything in the diary was written by the same person but noted that this person (whoever it was) had used a ballpoint pen throughout! Unfortunately for Frank, as stated previously, the ballpoint pen was not available commercially until 1951 whereas Anne was known to have died of typhus in Bergen-Belsen in February 1945.

Because of this lawsuit in a German court, the German state forensic bureau, the Bundes Kriminal Amt (BKA) forensically examined the manuscript (which at that point in time consisted of three hardbound notebooks and 324 loose pages bound in a fourth notebook) with specialised forensic equipment. The results of these tests, performed at the BKA laboratories, showed that ‘significant portions’ of the work, including the entire fourth volume, were written with a ballpoint pen and since ballpoint pens were not available before 1951, the BKA concluded those sections must have been added subsequently and fraudulently.

More importantly perhaps, the BKA investigation clearly determined that none of the diary handwriting matched known examples of Anne’s handwriting. The German magazine, ‘Der Spiegel’ published an account of this report alleging that some editing post-dated 1951 and an earlier expert had determined that all the writing in the journal was by the same hand and thus that the entire diary was a post-war fake.

This BKA exposé, as a result of the frantic lobbying of Jewish/Zionist interests was immediately retracted but later ‘inadvertently’ released to researchers in the United States. I invite the reader to draw his / her own conclusions from this fact.

For what reasons could this fraud have been perpetrated? Were the reasons simply for financial gain or was there a more sinister motive underlying its execution? Could it be part of the overall conspiracy to gain sympathy for the Zionist cause by exaggerating Jewish suffering and casting further aspersions on Nazi activities or is this proposition too unrealistic to contemplate seriously?

You decide for yourself, but whatever the reason for it, the end result is that the memory of an innocent child-victim has been sullied by being blatantly used either for personal, monetary gain or on behalf of a minority but massively influential group, Zionism in order to surreptitiously benefit certain vested interests. However, perhaps more importantly, this shameful episode further demonstrates how simple is the process by which it is possible to deceive huge numbers of people on virtually any subject one could choose by the simple expedient of powerful and persistent propaganda techniques and the constant, incessant repetition of statements designed to create a false but long-lasting impression.