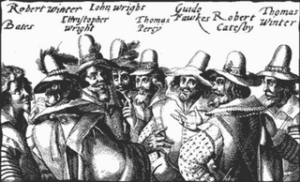 Some of the 5th November ‘gunpowder plotters’

The so-called ‘Guy Fawkes plotters’, Catesby, Percy and Tresham were in reality working for the English government and it was in fact King James I’s spymaster, Robert Cecil, who blackmailed Robert Catesby into organising a plot to discredit Catholics.

As with the debunking of any of mainstream history’s ‘givens’, we always need to ask the question ‘why’ and this can usually be answered by investigating as to who would most benefit from the deception, ‘cui bono’ in Latin. In this particular instance, the purpose was to expedite the smooth transition of King James VI of Scotland onto the throne of England as James I.

The previous reigns of James’ 2nd cousins, Elizabeth and Mary had been greatly characterised by religious genocide, firstly by Mary against the Protestants and then by Elizabeth against the Catholics and these ongoing sectarian schisms of the previous half-century had created deep divisions and torn families and communities apart. So, placing a Catholic on the throne of a now thoroughly protestant nation required a large degree of what we would now refer to as political ‘spin’, in order to prevent insurrection!

James was thus engineered via the expedient of the gunpowder plot, to be seen as clamping-down hard on any Catholics who could have been perceived to be taking advantage of their presumed newly-found freedoms under a Catholic monarch.

So the scene was set for the deception. In 1604, Robert Catesby, in actuality an agent of the English government, was involved in the planning of the Gunpowder plot along with Sir Robert Cecil, ostensibly a scheme to blow-up the English parliament on the 5th November 1605 and kill King James and as many members of Parliament as possible.

On his death-bed, there were statements by Robert Catesby’s servant that Robert Cecil and Catesby met on three separate occasions in the period leading up to the events of the night of 5th November 1605. At a meeting at the Duck and Drake Inn, Catesby explained the plan to Guy Fawkes, Thomas Percy who was another agent of the English government, John Wright and Thomas Winter and all of them agreed to join the plot.

In the following months Francis Tresham, another undercover government agent, Everard Digby, Robert Winter, Thomas Bates, and Christopher Wright also agreed to join the conspiracy. Immediately prior to the event, Thomas Percy was seen exiting the house of Robert Cecil and after the plot was ‘discovered’, Catesby, Percy, Christopher Wright and John Wright headed to Holbeche House in Staffordshire in the English midlands and on the 8th November 1605, government troops arrived at the house and shot dead the conspirators Robert Catesby, Thomas Percy, Christopher Wright and John Wright whilst Digby, Robert and Thomas Winter, Bates and Fawkes were executed by being hanged, drawn and quartered in January 1606 after suffering extreme torture in order to extract confessions.

It was also widely rumoured that Francis Tresham was poisoned while being held captive in the Tower of London.

In his book ‘The Gunpowder Plot: The Narrative of Oswald Tessimond’, Francis Edwards claimed that Francis Tresham escaped from the Tower of London, probably with the help of the Government, went abroad and changed his name to Matthew Bruninge.

“If Guy Fawkes case came up before the Court of Appeal today, the… judges would surely… acquit him… …no-one has ever seen the attempted tunnel. Builders excavating the area in 1823 found neither a tunnel nor any rubble. Secondly, the gunpowder… In 1605, the Government had a monopoly on its manufacture… The Government did not display the gunpowder and nobody saw it in the cellars. Thirdly, these cellars were rented by the government to a known Catholic agitator… Fourthly, the Tresham letter… Graphologists [handwriting experts] agree that it was not written by Francis Tresham.…Guy Fawkes was at a wedding of Cecil’s niece, along with Cecil AND King James. …Why didn’t Fawkes kill the King there, and isn’t it mysterious that all figures in the plot went to a wedding together?” R. Crampton, ‘The Gunpowder Plot’, 1990

So, the plot was just a charade, albeit one with a very serious purpose. It was all part of the Elite’s ongoing grand conspiracy and this chapter of that conspiracy was the unification of England and Scotland to create a United Kingdom and thus the foundations of the future British Empire to-be. It was, at its roots, yet another False Flag operation this time using the protestant-catholic dialectic and it was this first stage of the unification of two hitherto completely distinct countries that was designed to facilitate the next ‘Crown Empire’ and the thrust towards globalisation.

I am also of the view that the King James Version of the bible, written in 1611 was another work of social engineering and is the script which, the hidden Elite and their not so hidden bloodlines are following as we approach the end of the age. The Pope declared some time ago that were are now in the time of Revelations, a point in our history that is also recognised in Freemasonry and of course ‘apocalypse’ is from the Greek, meaning the ‘unveiling’ – the ‘reveal’.

When people talk about a conspiracy so large that it defies all belief and imagination, they really are not exaggerating.