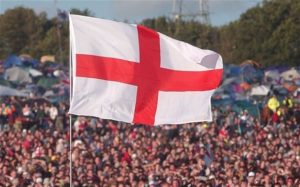 The Flag of England

The Crown, the Crown Temple or Crown Templar are all synonymous and date back to the Knights Templar Church. But please understand that this whole pompous, title-ridden nonsense, is just a front for a historically long established, institutionalised criminal and financial oligarchy that has been deceiving and robbing the masses for centuries. The Temple Church was built by the Knights Templar in two parts; the Round and the Chancel. The Round Church was consecrated in 1185 and modelled on the circular Church of the Holy Sepulchre in Jerusalem and the Chancel was completed in 1240. The Temple Church serves the both Inner and Middle Temple and its grounds are also home to the Crown offices at Crown Office Row. This Temple ‘Church’ is significantly outside of any Canonical jurisdiction.

Between 1095 and 1291 AD, the Roman Catholic Church instigated seven enormous bloodbaths now referred to as ‘the Crusades,’ which were nothing more than a convenient excuse for torturing, maiming, beheading and generally mass-murdering millions of Muslims in ‘the name of God.’ The Church’s brutal soldiers were named the ‘Knights Templar’ or ‘Knights of the Temple of Solomon’ and eventually evolved into today’s secretive brotherhood, the Freemasons after the order was ‘dissolved’ in the early 14th century.

The Knights Templar were a pseudo-Christian group of Crusaders, who took up residence in Solomon’s Temple in Jerusalem and spent many years digging a tunnel in an attempt to find the Ark of the Covenant, because it was believed that whoever held this ancient treasure, would have the power to rule the whole world and hence the various legends prevailing throughout recorded history regarding the search for the Ark. Incidentally, the red cross and sword on the flag of the city of London and the red cross on the flag of England (the cross of St. George, below) is actually the Knights Templar’s symbol and is overtly and prominently displayed by many corporate and other entities, for example by the Italian car manufacturer, Alfa Romeo and more significantly by the Red Cross organisation itself, from whence it gets its name. The Cross of St. George also appears on the flags of several nations.

Between 1450 and 1700, the Catholic Church followed-up their ‘holy’ terror campaign with the Spanish Inquisition. Based on rumours and accusations of practicing witchcraft, the Catholic Church hunted down, tortured and burned-alive tens of thousands of innocent men and women who were allegedly practising the black art of witchcraft.

And more recently, over the course of the last five decades, more than fifteen hundred Catholic priests and bishops have been identified in the sexual assault of tens of thousands of boys and girls in their trusting congregations and orphanages. Whilst preaching spiritual values of poverty and chastity, the Catholic Church accumulated all its immense wealth by placing a price-tag on sin. Many bishops and popes actively marketed guilt, sin and fear for profit, by selling ‘indulgences,’ in effect licences to sin and be subsequently forgiven. Worshippers were encouraged to pre-pay for sins that had not yet been committed and obtained a pardon for them in advance and those who did not pay were threatened with eternal damnation and excommunication. Another method of money extraction was to entice wealthy land owners to bequeath their land and fortunes to the church on their death-bed, in exchange for a blessing which would supposedly enable them to go to heaven. Pope Leo V actually rebuilt St. Peter’s Basilica, by selling tickets out of hell and into heaven.

The Knights Templar, were originally named ‘the Poor Fellow-Soldiers of Christ and the Temple of Solomon.’ This is a blatantly misleading title, considering the immense wealth and power of the Templars, who operated 9,000 manors across Europe and owned the majority of the mills and markets. It was the Templars that issued the first paper money for public use in Europe, thus establishing the fiat banking system we know today and being the predecessors of today’s banksters.

In England, the Templars established their headquarters at a London temple, which still exists today, Temple Bar (Crown Temple). This is located in the City of London, between Fleet Street and Victoria Embankment and the aforementioned ‘Crown,’ to be precise, is the Knights Templar church, also known as the Crown Temple.

The Temple Bar consists of what are known as ‘Inns of Court’ of which there are four; Inner Temple, Middle Temple, Lincoln’s Inn and Gray’s Inn. It is believed that the Inner Temple is the core group that governs the City of London Corporation, and controls the legal system of Canada and Britain while the Middle Temple controls the legal system of the United States, although all Inns are themselves controlled by the same elite group at the very top of the pyramid, of course.

The Master of The Temple is appointed and takes his place by sealed (non-public) patent, without induction or institution. All licensed Bar Attorneys or Attorners, in Britain, the United States and indeed everywhere else, owe their allegiance and give their solemn oath, in pledge to the Crown Temple, whether they realise this or not. In fact most do not. This is because all Bar Associations throughout the world are signatories and franchises to the International Bar Association located at the Inns of Court at Crown Temple, which are physically located at Chancery Lane behind Fleet Street in London. The American Bar Associations are all franchises to the Crown.

The Bar Association is a British/Masonic system that has nothing to do with the country’s sovereignty or the constitutional rights of its people. This is why, all flags displayed in UK or US courts, have a gold fringe around the edges denoting international and/or maritime law as these courts have no jurisdiction whatsoever on dry land in these Sovereign territories despite the pretence to the contrary.

The governments of the United States, Canada and Britain are all subsidiaries of the Crown, as is the Federal Reserve in the US and Canada (aka the 13th Federal Reserve.) The ruling Monarch in England is also subordinate to the Crown and the global financial and legal system is controlled from the City of London by the Crown.