Ask most people about King Arthur and the response you will likely elicit is that he never really existed and is simply ‘a legend’. I should like to ask in all seriousness, how are these ‘legends’ propagated in the first place? It is far too simplistic to dismiss as a legend anything that does not fit the accepted version of history, in my view. These ‘legends’ do not spontaneously erupt from nowhere and I strongly submit that there is never ‘smoke without fire’ in these cases. Indeed, ‘real’ history researchers, Alan Wilson and his colleague Baram Blackett have spent many years researching this one topic alone and have uncovered a plethora of documentary and archaeological evidence to prove beyond question that not only did Arthur exist, but there were actually two King Arthurs, several centuries apart and that the famous legend is likely a composite of those two distinctly separate entities.

King Arthur, son of Uther Pendragon and his Knights of the Round Table in Camelot, his advisor Merlin the magician or sorcerer and his sword Excalibur, has been a popular fable for many centuries. In this legend, Arthur is married to Guinevere and he waged war against the Saxons of South East Britain under their ruler Hengist (who significantly did actually exist – even according to mainstream history). In these fables, Hengist (a Saxon) was invited into Britain by Vortigern, a traitor who had killed many of the aristocracy of Britain of the time. The stories also relate a stirring tale of how Arthur also planned a successful military campaign against all of Britain, Europe, and even the might of Rome itself which culminated in the death of the Roman Emperor.

It has always been puzzling to scholars that the myths and legends of King Arthur have defied all logical attempts to identify and pin upon him an identity of any kind. In reality the confusion may well be ascribed to the fact there are definitely two separate entities involved and this duality is no doubt partly responsible for all the confusion surrounding the attempted identification of Arthur. There were actually several Arthurs of Britain but only two who match the exploits recounted in the classic myths. The first one was a General and the son of the British Emperor Magnus Maximus, who in the late 4th Century with his army, left for Europe and eventually confronted the power of Rome, in the process killing the Emperor Gratian. 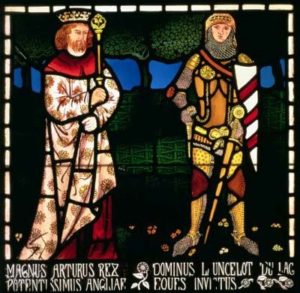 Arthur mark II was a King of the 6th Century AD. He was the son of Meurig ap Tewdrig and it was this Arthur that successfully defeated the Saxons. The confused histories by later writers such as the medieval historian Geoffrey of Monmouth accidentally (or possibly even deliberately) merged these two distinct Arthurs into one and this has caused much confusion and obfuscated the authentication of British history of this period. This has also been further compounded by the deliberate falsification of British heritage by entities whose interests are not best served by the truth. The ramifications of the Arthur revelations are negatively significant for the religious and political powers that be.

King Arthur I, the son of Magnus Maximus of the 4th Century AD and King Arthur II of the late 6th Century AD, can both trace their ancestry back to the British, Holy Roman Emperor Constantine and (according to Wilson and Blackett) back even as far as the ‘Holy Family’ itself which allegedly arrived in Britain in 37AD and for which event there is plenty of documented evidence. They can also both trace their lineage back to King Brutus, one of the great-grandsons of Aeneas of Troy. Brutus apparently arrived in Britain around 500BC.

The ‘Khumry’ people (the origin of the Welsh word ‘Cymru’ meaning Wales) were also part of this huge migration into Britain at this time and were the original lost ‘Ten Tribes’ who migrated north-westwards after the murder of Sennacherib, the King of Assyria in the early 7th century BC. These people, over a long period of time, travelled through Asia Minor and they are recorded in Assyrian texts as the ‘Khumry’ and are believed to be the same tribe that ancient Greek writings also refer to as the ‘Cimmeroi’.

According to Wilson and Blackett’s stunning research and as outlined in their subsequent book, published in 2007, ‘The Discovery of the Ark of the Covenant’, these people actually brought the Ark of the Covenant with them to the island of Britain and here it lies still, buried in a field in Wales, the precise location of which has been identified by Wilson and Blackett although unsurprisingly, they have been denied permission by the authorities to instigate an archaeological dig. However they did conduct a geophysical survey and metal detector investigation of the plot and a ‘non-ferrous’ metal object, four to four and a half feet long by one foot by one foot, has been located precisely in that spot, a few feet down below the surface.

Again, according to Wilson and Blackett, the Khumric people were originally to be found living in Egypt before Moses famously led them away, sometime in the middle of the 14th Century BC and their ancient Khumric alphabet, Coelbren is still evident today and is utilised with incredible accuracy in the translation of Egyptian hieroglyphs.

Unsurprisingly, another major source of opposition to these incredible revelations is the Roman Catholic Church, another protector of the status quo at all costs, not least because of what Wilson and Blackett’s research has revealed regarding Christianity. When Augustine arrived Britain in 597AD he was apparently astounded to learn that the British already had Christian churches as well as priests and in fact the British Apostolic Christian religion was even more advanced than that of Rome and again according to documented history, arose from the fact that a man who went by the name of ‘Jesus the Nazarene’ who did not die on a cross in 33AD, apparently arrived in Britain in 37AD. All this information is of course, still regarded as highly heretical by the Church hierarchy, even today.

Obviously this version of events completely demolishes mainstream Christianity’s view and renders it completely unsurprising that this research has been rejected out of hand by the establishment, both religious and political. Whether or not one believes that Jesus Christ was indeed the son of, or the earthly incarnation of ‘God’ or Jehovah, there does appear to be much evidence that such a person did actually exist and indeed many other so-called ‘legends’ from several diverse sources also propound the story of Jesus visiting Britain, after the alleged crucifixion event, a fact which lends more credence to this hypothesis.

In fact, Christianity was not introduced into Britain from Rome as is popularly ascribed to be the case, but was actually exported to Rome from Britain in 51AD by King Caradoc (also sometimes referred to by his Latinised name of Caractacus) who was taken to Rome and held there for several years.

The truth is that real British history is the most comprehensively recorded history in all Europe and had it not been for the ‘Holy family’ arriving here in 37AD, none of this ‘taboo’ history would be an issue. Indeed, it is only since the beginning of the 19th Century that the suppression of real British history has been actively and widely taking place. Up until that point in time, much of this knowledge was widely available to anyone with access to books and the ability to read and research. This obviously excluded, as ever, the ordinary man-in-the-street of the times and thus was it possible to hide this knowledge from the masses until such a juncture whereby a sustained cover-up was rendered necessary by the steady increase in literacy of the population.

The academic community today acknowledges only its own invented versions of Roman Britain, Saxon Britain and Viking Britain and any major artefact discoveries made by archaeologists are inevitably categorised as belonging to one of those alternatives and never, ever under any circumstances ascribed to being Khumric-British, despite there being an abundance of these already in existence and many, many more being unearthed, constantly.