Many people believe that ‘Michelle’ Obama is not all that ‘she’ seems. Judging by ‘her’ mannerisms and physical looks alone, there is enough evidence to ask questions. Indeed, some say that Michelle Obama, ‘First Lady’ of the US, was born a man, Michael LaVaughn Robinson in Chicago, Illinois on 17th January 1964. Michael is the second son of Fraser Robinson, a well-known cocaine dealer and Marian Shields Robinson, a transient street prostitute who was diagnosed with the HIV virus in 1998. Michael was a popular high school athlete and in 1982, he won a scholarship to play football for the Oregon State Beavers, but shortly afterwards, suddenly dropped out of the school. Friends at the time recalled that Robinson regularly told them that he was a, “woman trapped inside a man’s body.”

To hide the shame of his new identity, Robinson left Oregon State to attend Princeton University under his new legal name, ‘Michelle Robinson’ and several years later, he met Obama who quickly became aware of Michelle’s ‘true’ identity. They subsequently ‘married’ and adopted two children. You should draw your own conclusions as to whether Michael or Michelle is a male or a female, but there is no doubt that the marriage, is as fake as Obama’s personal history and his presidency. 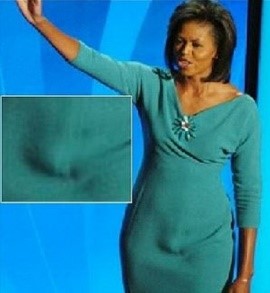 We know that Obama’s life has been a long sordid tale of dis-information and deception so being ‘paired-off’ in this way for appearances’ sake is not that difficult to believe. But again, this could all be more dis-information cover, like claiming he is a ‘closet-Muslim,’ when he is really a creation of the Zionists. Yet one thing through all this mystery and subterfuge is certain, Obama is a whole new breed of presidential evil. A wolf in sheep’s clothing, with no sense of guilt, compassion, empathy or decency. He has betrayed everyone who ever believed in him, maybe black people most of all, but despite all this (or perhaps more likely because of this), he was the Rothschilds’ choice as president.

Obama’s secret, gay lifestyle however, is ‘secret’ only from the brainwashed masses. He began frequenting a gay club called ‘Man’s Country’ in the mid-1990s, during the time he ceased being a ‘lecturer at the University of Chicago Law School’ and his election as an Illinois State Senator in 1996. Rahm Emanuel his ‘boss,’ reportedly also joined ‘Man’s Country’ after he left the White House and moved back to Chicago in 1998 to join the investment firm of Wasserstein Perella.

Man’s Country is a membership club that caters for gay men. The club’s website advertises steam rooms, ‘fantasy rooms,’ bedrooms, male strippers and gay adult movies. However, this was not the only venue for Obama’s predatory gay-sex activities. The Chicago gay community is aware that Obama often made contacts with younger men at his famous ‘pick-up’ basketball games.

The truth is that far from being a Muslim or ‘Muslim lover,’ as so many people have been deceived into believing, Obama is a Zionist agent. Even his name, ‘Barack Obama,’ has well-documented Hebrew roots. ‘Barack’ derives from ‘baraka,’ which in Hebrew means ‘blessing.’ His Zionist roots are clear.

Rahm Emanuel is an aggressive, vulgar, Chicago-based ‘enforcer,’ with an in-your-face, pit-bull style. A rabidly Israel-first, Orthodox Jew, Emanuel was educated in a Talmudic yeshiva and served as a volunteer in the IDF, the Israeli Defence Force. It is probably also superfluous to state that he is a dual, Israeli-American citizen.

Mentored by members of Chicago’s corrupt political machine, Emanuel entered Washington politics in 1991 after becoming Bill Clinton’s campaign finance committee director. After leaving his post as a policy aide for the Clinton administration, he used his influence as an investment banker to rake in millions during the late 1990s. With this money, Emanuel won a congressional seat in 2002, became the fourth-ranking House Democrat by 2006, and then became the most powerful member of Obama’s executive office team.

Emanuel’s Israeli-born father Benjamin, was an integral member of the Zionist terror-group known as Irgun during the 1940s. Along with another notorious terrorist group, the Stern Gang, Irgun bombed Jerusalem’s King David Hotel in 1946 where 96 people were killed, whilst also instigating the 1948 Deir Yassin Massacre.