On the 27th / 28th April 1944, more American soldiers died in a D-Day rehearsal, than on the 6th of June at Utah Beach. Attacks by German torpedo boats and ‘friendly fire’ cost as many as 1500 American servicemen’s lives, and yet the incident was kept secret for almost fifty years.

During the months leading up to the D-Day landings in France on June 6, 1944, the Allies secretly trained for the invasion, code-named Operation Overlord. Slapton Sands beach in Lyme Bay on the southern coast of England was chosen for its resemblance to Utah beach, where, along with Omaha beach, the Americans would be invading. In the autumn of 1943, approximately 3,000 villagers in the area were evacuated — many against their will — so that the beach landings could be held in total secrecy. 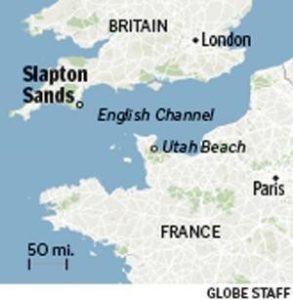 As ‘D-Day’ approached, the training became more vigorous and involved more and more ships and men. ‘Exercise Tiger,’ planned for 22nd– 30th April 1944 was a full dress-rehearsal for ‘D Day,’ involving 30,000 men and many ships, including nine large tank landing-ships known as LSTs, fully loaded with men, tanks, fuel and other military equipment. LSTs were designed to run-up onto the beach and open their front cargo doors, allowing its cargo of tanks and vehicles to exit onto the sand. 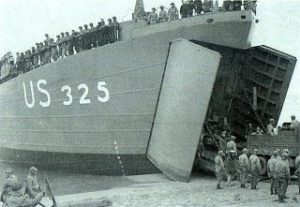 The Royal Navy patrolled the entrance to Lyme Bay with two destroyers and five smaller boats, whilst across the Channel, they had motor torpedo boats (MTBs) patrolling the waters around Cherbourg, France, to keep watch for marauding German E-boats.

E-boats were large, 100-foot-long, fast torpedo boats which could reach speeds of 40 knots (around 47 mph) and had been intercepting ships in the English Channel. The German designation was S-boot, for ‘Schnellboot,’ literally ‘fast boat.’ Their home-base in Cherbourg had noticed the increased radio traffic emanating from the area around Slapton and sent nine E-boats to investigate after having managed to evade the British torpedo boats patrolling Cherbourg.

In the early hours of 28th April, as the eight LSTs were returning to Slapton Sands in a column, the nine German E-boats discovered what they thought was a convoy, prepared to attack and at about 2.00am, LST-507 was torpedoed and burst into flames. It’s surviving crew abandoned ship but a few minutes later, LST-531 was torpedoed and sank in only six minutes, trapping most of its occupants below decks. The other LSTs and the two British destroyers opened fire on the German E-boats, but without success, following which, LST-289 was then torpedoed and badly damaged. At least one other LST was struck by a torpedo, but it managed to somehow survive.

By 4.00 am it was all over and the E-boats escaped back to France. Two LSTs had been sunk and at least one was one badly damaged, managing to limp back to port. Flaming oil covered the waters, burning to death many who had abandoned ship, while many who escaped the flames perished from hypothermia in the cold waters of the English Channel. All other ships were ordered to continue the exercise, leaving the dead and dying to their fate, but the captain of LST-515 disobeyed these orders and lowered boats and threw cargo nets over the side to pick up survivors, saving more than 100 men. When it was all over, 749 soldiers and sailors had been killed. No figures have ever been published for the number of men wounded in the attack.

In his CIA interrogation following the end of the war, Heinrich Mueller, Chief of the Gestapo, claimed that an agent had alerted them to a massive exercise involving many men at Slapton Sands and also that the Germans had returned to base with the invasion plans taken from the corpse of a US army officer. “…this information which indicated that Normandy was the main target was sent on to higher commands but was not acted upon.” ‘Gestapo Chief: The 1948 Interrogation of Heinrich Mueller,’ ed. Gregory Douglas, p. 142

On the Allied side, the disaster was compounded by a long list of highly conspicuous ‘failures’…..

Royal Navy radar picked up movement of the Nazi E-Boats but did nothing.

Radio frequencies given to Americans were changed without notice.

The one-sided battle had been watched by Royal Artillerymen at Blacknor Fort, high on Portland’s western cliffs. The men had the E-boats in their sights, within range, but were ordered not to fire by an American officer, because of the number of Allied personnel fighting for their lives in the water.

There was no emergency training so life jackets were not worn correctly.  They flipped the wearer upside down with his head in the water.

Whilst the military, down the years, has acknowledged the aforementioned facts, there are additional allegations that revolved around the order from Supreme Allied Commander General Eisenhower, that real ammunition be used during the exercise in order to acclimatise the men to actual battlefield conditions. It is alleged that later, as the exercise continued, HMS Hawkins, a British cruiser, fired live shells while the surviving American soldiers stormed the beach. The soldiers were meant to proceed no further than a white taped line that had been set up, but, in the confusion, many soldiers went straight-on through it resulting in a further 200 to 300 men being killed by friendly fire.

The accounts of those present that day indicate that, as thousands of GIs swarmed ashore from the landing craft, they were cut down by bullets fired by comrades playing the role of German defenders, who had for some reason been given live ammunition, but not informed of this fact. Letters revealed how Lieutenant-Colonel Edwin Wolf, from Baltimore, heard several shots “zinging” past his ear as he observed the exercise from a vantage point nearby, and also saw “infantrymen on the beach, fall down and remain motionless.” Under a hail of fire, Wolf quickly retreated.

Live bullets also whizzed past Hank Aaron from West Virginia, driver to a general who was observing the exercises. Aaron scrambled away from the line of fire, then looked-up and saw five men, dead. Generals Omar Bradley and Eisenhower watched “the murderous chaos” and “were horrified and determined that details of their own mistakes would be buried with their men.” Royal Engineer, Jim Cory watched dumbfounded from an observation post as soldiers streaming from landing craft were “mown down like ninepins.”

Yet there is not a single, official mention in Army records of any bodies being found on Slapton Sands and nor has the Pentagon ever mentioned any ‘friendly-fire’ disaster in Devon that spring. What happened to the bodies provides another twist to the secret of Slapton Sands. Witness statements suggest they were interred, at least temporarily, in a mass grave nearby, despite the fact that there was no shortage of potential burial sites in the remote fields behind the beach. Suspicion that US troops dumped bodies in hastily built graves around nearby Blackawton was first aroused 20 years ago, when Dorothy Seekings, a baker’s daughter who supplied bread to the troops during the exercises, said she had seen large numbers of GI bodies being buried near the village.

Seekings was ridiculed at the time, yet her description and the location now seems to match closely that of farmer Francis Burden, who sold the Americans fresh milk. One morning in April 1944, Burden stopped short as he crossed a narrow lane leading out of Blackawton. A huge pit, up to two acres in size, had been dug by US troops and large enough to take hundreds of coffins. Boxes big enough to hold a man were stacked nearby. Today, a discernible mound marks the location.

After the war, the field belonged to farmer Nolan Tope and just before he died, Tope was asked if US troops had ever been buried on his land. He replied enigmatically, that Seekings “knew only a small part of it,” but nevertheless vowed to take his secret to the grave. What more was he hiding and why was he so reluctant to tell, I wonder? I would say that there is a strong chance he was threatened that if he ever told what he knew, then it would be the last thing he would ever do, and maybe his family, too.

Detailed records kept by the stationmaster at Kingsbridge railway station, five miles away, revealed that three trains were secretly loaded with the bodies of GIs under military guard between July and August 1944. The trains, each able to carry at least 100 corpses, were “crammed with men dug from mass graves,” said local rail historian Ken Williams. The historian’s father, George, who served in the Royal Navy during the war, soon realised he also saw the bodies of dozens of men washed ashore on the sands. “He told me how the sea turned red,” Ken said. The families however were told that their loved ones had died in the Normandy landings, six weeks later.

Local author Ken Small, whose book ‘The Forgotten Dead’ broke the story of the E-boat attack, dismissed the rumours until just before he died. He then told the historian Williams that Seekings had been right. “I was stunned,” said Williams.

Even so, many people still refuse to accept that hundreds of US soldiers may have been interred in the sleepy Devon countryside 70+ years ago.  Such scepticism fails to explain the account of former land girl, Joyce Newby, who helped to make hundreds of coffin lids at a nearby timber yard in spring 1944. She said they were for victims of “friendly fire at Slapton.” Or indeed that of former US serviceman Harold McAulley, who told of dragging dead soldiers off the sands and later helping to bury corpses – their faces black with oil and burnt – in a mass inland grave.

In any case, everyone involved, including the doctors, nurses and other personnel in nearby military hospitals filling-up with wounded and burned men, were sworn to secrecy on pain of court martial. The invasion was almost called-off because ten officers who knew the locations of the actual invasion beaches, were missing and it could not be certain whether any of them had been captured by the enemy. However, the invasion was soon back on schedule, after all ten of their bodies were found. As a postscript to the sorry affair, when the survivors of ‘Exercise Tiger’ stormed Utah Beach on D-Day, 200 were killed or wounded.

Admiral Donald Moon was made the scapegoat and he paid the ultimate price three months later, on 5th August 1944, when he shot himself. Close friends said that he never recovered from the disaster at Slapton Sands.

To this day, the only memorial to the incident is in the village of Torcross, Devon where locals erected a plaque commemorating the dead, along with a Sherman tank that was raised from the waters. Although the military eventually erected another memorial thanking the villagers for evacuating their homes during this period, there is no ‘official’ memorial to those killed during Exercise Tiger. Survivors of the horror of that night still make pilgrimages to Torcross, but their numbers are now drastically dwindling as ‘Father Time,’ little by little, continues the job started inadvertently by their comrades on that now long-gone-night in April 1944. 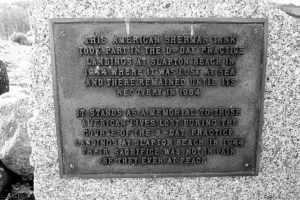