The apocryphal story about Hitler and his wife Eva Braun’s suicides and subsequent ‘home-made cremations’ with a can of petrol in the grounds adjoining the ‘fuhrerbunker’ at the end of April 1945 is simply Soviet Russian propaganda in collusion with British and American wartime High Command and nothing more.

Even the mainstream, politically correct, Elite-controlled History Channel’s own investigation in the early 2000s proved beyond reasonable doubt that the skull portion and dental fragments in the possession of the Russians, retrieved from the burial of the burnt corpse of ‘Hitler’ could not have belonged to him. And this was after an extensive forensic investigation lasting more than a year, during which his authenticated dental records were meticulously compared with the burnt tooth and bone fragments.

At the time, the Russians did not wish to admit that Hitler had evaded capture as was planned from the start. They believed it would have reflected extremely badly on them and so their propaganda machinery went into overdrive and concocted a credible story to deflect criticism from them, over the sorry affair. As time went on, the propaganda as always, came to be regarded as ‘fact’ and the real story died, along with the propaganda’s perpetrators. In fact, the usual modus operandus.

It is well known that Hitler had more than one ‘double’, just as in more recent times there have been several Saddam Husseins and Osama bin Ladens and thus how easy would it have been to surreptitiously execute one of them and burn his body in a pit? I personally find it beyond incredible to seriously suggest that in the last months of the war when the Russians were rampaging through Eastern Germany towards Berlin that no arrangements had been made either through his own efforts or on his behalf by third parties, to evacuate him and Eva Braun to safety. Are we really supposed to believe that he just remained there in the bunker awaiting his ultimate and inevitable fate? All the other major Nazi figures (with the possible exception of Josef Goebbels and family – and even that is by no means certain) made good their escapes whilst there was still time enough to do so, albeit that several of them were ‘captured’ in the following weeks and months.

In accordance with my extensive research on the subject, I firmly believe that Hitler and Braun were secretly flown via Hamburg to Norway, where they were transported to South America (probably Argentina) by U-boat. According to contemporary Pravda (the Soviet newspaper) reports, at least five U-boats full of Nazi officials left Norway for Argentina during the period from the end of April to early May 1945. Furthermore I also believe that these people were not merely just allowed to escape, but were actively in effect ‘rescued’ in complicity with the British and the US Elite on the basis that in their eyes, they had committed no crimes but were merely acting out their intended roles in the stage play otherwise known as World War II and now that their performance was at an end, they were free to seek refuge with whomsoever would have them. 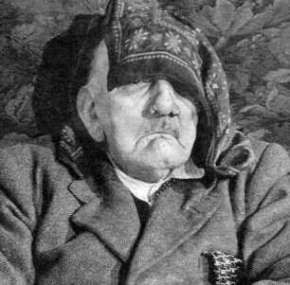 So, after the war the five German U-boats reached Argentina with no less than 50 high ranking Third Reich officials on board including Hitler and Braun. During the trip they even sank a US battleship and the Brazilian cruiser Bahia with a death toll of more than 400, including many US naval personnel. Both the US and the British Government have systematically covered up this operation. Why would this be? Did they actually arrange for Hitler to escape? I firmly believe so.

Operation ‘Übersee Sud’ (Overseas South) was the code-name of the plan that helped certain high-ranking Nazi officials to escape from the Soviets, possibly in the safekeeping of, but certainly with the co-operation of the British and US Governments.

That same name that always seems to be lurking in the background in these clandestine affairs, Winston Churchill, was apparently the mastermind behind the escape. The Argentinian Navy established a ‘freedom zone’ to allow the Germans to disembark without being disturbed, in accordance with British Elite instructions.   So, was Adolf Hitler definitely a passenger on one of these U-boats? It is believed by several respected researchers that Hitler, Eva Braun, her sister Gretel Braun and Martin Bormann escaped via this clandestine operation, however it does still remain unclear whether Hitler specifically landed in Argentina or not.

“We know for sure that Hitler fled either to Spain or to Argentina.” Josef Stalin in conversation with the US Secretary of State, James Byrne in late 1945

“We have not been unable to unearth one bit of tangible evidence of Hitler’s death. Many people believe that Hitler escaped from Berlin.” General Dwight D. Eisenhower, 1946

“Russia must accept much of the blame that Hitler did not die in May 1945.” Michael Mussmano, presiding judge at the Nuremburg trials, 1946

“We did not identify the body of Hitler. I can say nothing definite about his fate. He could have flown away from Berlin at the very last moment.” Marshall Zhukov, Commander in Chief of the Soviet army, 1945

Do not these three quotations alone tell us everything that we need to know? If these people genuinely believed he had escaped, how does this reconcile with the popular myth of his death in the bunker? The simple answer is that it does not. These claims of suicide and cremation on waste land are provably false and were no doubt spread as deliberate disinformation to prevent the truth from reaching the masses. This of course is more compelling evidence of the systematic falsification of history at work. 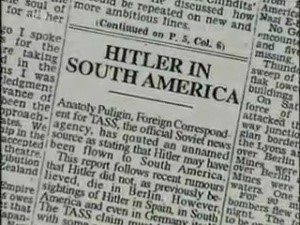 Apparently, according to a Japanese source, Hitler flew to Norway at 4.14 pm on the 30th April 1945 in an unmarked aircraft together with Eva Braun and a small party of friends, then reached his final destination, Argentina by U-boat and went into seclusion after ‘completing his duty’. He spent the rest of his long life in Mendoza in the northwest of Argentina, protected by the Nazi SS and the indigenous Jewish community (how ironic, but how appropriate). Hitler reportedly died in Mendoza, Argentina in December 1985 at the age of 96 and his remains were buried in a public cemetery in Palmero, thirty miles southeast of Mendoza.   The fate of his wife, Eva Braun is unknown.