Upon the death of her husband, Prince Albert, and for the rest of her long life, Victoria was a black-clad, virtual recluse.  The elderly monarch lived in an atmosphere of grim silence in her castle at Balmoral, Scotland.  She had as little contact with her staff as possible; if they needed to tell her something, they wrote a short note and placed it inside a sealed envelope and if their paths crossed in the house or gardens, they were expected to hide behind a convenient piece of furniture or if outside, the nearest bush.

It was at this time that John Brown, a dour Scotsman, entered her life.  At first he was only employed as Victoria’s fishing and hunting guide (a ghillie,) but as time passed and they grew closer, he accompanied her almost everywhere and was her constant companion.  Brown was also given duties as Victoria’s bodyguard, responsible for her safety on her rare public appearances.  There had been several assassination attempts whilst Victoria rode in her carriage and contrary to the common myth that she was a well-loved and respected queen, the real truth was that she was hated by many, and during her reign Britain had never been closer to revolution in the previous two hundred years, such was the strong revulsion for her at the time.

Brown was born in 1826 and he died in 1883, aged 56. He treated Victoria somewhat differently than did all the other servants.  He was altogether more informal, indeed more like a friend than a servant and in fact many believe that he was actually her lover.

After John Brown, Victoria eventually acquired another servant / confidante in the form of her Indian manservant, Abdul Karim.

In the Queen’s Diamond Jubilee year of 1897, the Prince of Wales, the future Edward VII actually threatened to have his mother declared insane.  Unthinkable?  Well, that is exactly what happened after her Royal Household refused to condone the Queen’s shockingly intimate friendship with Abdul. 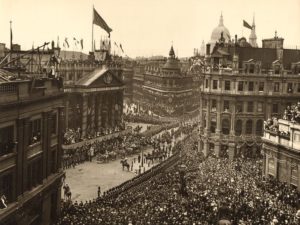 Victoria had become very fond of India and everything Indian and maybe this was the initial attraction for her, in this ‘romantic’ man of mystery.  In fact she became so infatuated with the tall, handsome Muslim, Abdul Karim that senior royal advisers plotted to have her declared insane just days before her Jubilee unless she halted a controversial plan to knight him.

The young waiter – he was just 24 – had begun serving at the Queen’s table in June 1887 after being sent to London with a gift from her Indian subjects.  He soon began bewitching her with romantic tales of mysterious India and cooking up delicious curries for her in the royal kitchens.

Victoria promoted Abdul from waiter to her personal teacher or ‘Munshi’ and after he began to teach her a few words in Hindi, the pair grew even closer.  She had been starved of affection since the death of John Brown, and Abdul Karim’s great-grandson, Javed Mahmood, recently said it is not difficult to see why she fell for his great-grandfather.  He said, “Abdul was a very warm man.  He was very jolly, entertaining – a very human person.  Maybe those were the traits that attracted the Queen eventually, because he came across as a man of flesh and blood, and she wasn’t used to real people around her.”

Obviously, their growing intimacy was not well received in the strict, hierarchical world of the royal household.  Nevertheless, in 1894, Abdul was elevated to the position of the queen’s Indian Secretary making him an official member of the ‘inner circle.’  The idea that a servant, an outsider who has no pedigree or background, could suddenly attain a position of great closeness with the Queen was not very well received by the rest of her courtiers. And it wasn’t just Abdul’s ‘class’ that troubled the Queen’s advisers, they were also scandalised by his race too.

But the more the royal household attacked Abdul, the more the Queen defended him.  She sent an angry memo to her Private Secretary, Sir Henry Ponsonby, saying, “As for Abdul Karim, the Queen cannot praise him highly enough.  He’s zealous and attentive, a thorough gentleman.”

The Royal household retaliated by sending investigators to India who returned with ‘alarming’ information about Abdul’s origins.  He was not, as he had claimed, the son of an important military doctor, in fact, his father was a lowly pharmacist who worked in Agra jail where Abdul himself had worked as a clerk.  But these revelations only served to push the Queen closer to Abdul.  She took a stance that was astonishing at the time – accusing her household of racial prejudice.  In another memo to Ponsonby she wrote, “To make out that the Munshi is low is outrageous.  Abdul feels cut to the heart to be thus spoken of.  The Queen is so sorry for the poor Munshi’s sensitive feelings.”

Rumours soon began to circulate to the effect that Abdul was passing Victoria inflammatory advice about India and that he was a spy, leaking secret foreign policy information.  Then in 1897, just a few weeks before Victoria’s Diamond Jubilee celebrations, the Queen announced she planned to knight Abdul.

This ‘bombshell’ was one step too far for her ministers and courtiers and even the Viceroy of India joined forces with the Prime Minister to oppose the move. In response, Victoria threatened to pull out of the Jubilee celebrations.  With possibly the most prestigious public event that the British monarchy had ever seen, now under serious threat, the Queen’s eldest son, Bertie, later Edward VII, assumed control of the situation.  He hatched a plan with the Queen’s doctor, Sir James Reid, who wrote to her, saying:

“There are people in high places who know your majesty well and say to me the only charitable explanation that can be given is that your majesty is not sane, and that at some time it will be necessary for me to come forward and say so.  I have seen the Prince of Wales yesterday and he has said he is quite ready to come forward, because it affects the throne.”

Victoria was angry but knew that she had to admit defeat and Abdul did not get his knighthood after all, but he was her constant companion during the Jubilee celebration and for the remaining four years of Victoria’s life, she was inseparable from her beloved servant.

But when she finally died in early 1901, the protection Abdul had enjoyed came to a sudden end.  Early one cold, February morning, around one month after Victoria’s death, the inhabitants of a small cottage on the Windsor Castle estate were startled by a loud banging at the door.  Tired and dazed, the head of the household, Abdul Karim, opened the front door to find a group of soldiers standing outside.  They were accompanied by Queen Alexandra, wife of the new king, Edward VII and by Princess Beatrice, youngest daughter of the late Queen Victoria.

Much to Karim’s astonishment, the party ordered him to hand over every letter, note and memo that the late Queen had sent him over the 13 years he had served her.  She had written him many letters, sometimes several in a day, and often signing them ‘your affectionate mother’ and Karim had treasured them.  Now the new King wanted them destroyed and so a bonfire was started outside the cottage and Karim watched in horror and sadness as every piece of paper bearing the Queen’s handwriting was consumed by the flames.

Karim and his family were then ordered to pack their bags and leave for India immediately. The fairy-tale had ended and 8 years later, Karim died heart-broken in Agra, aged only 46.

His descendants left for Pakistan when the country was partitioned in 1947, leaving behind all the land and exquisite gifts given to Abdul Karim by Queen Victoria and other European royalty.  Only a diary and a few items of memorabilia survived.  A lonely grave in Agra, some portraits in Osborne House, the Hindustani journals they wrote for 13 years and a house that bears his name in Balmoral, are all that remain today of the Queen’s closest confidant.

Yet the story still remains and as yet has still not quite been erased from the history books.