In 1905, the Tsar was manipulated by the Rothschilds into a war with Japan to undermine the Russian economy and sow the seeds of unrest among the population. The Rothschilds told the Tsar that they would finance the war, while in the United States, the Rothschild company, Kuhn, Loeb, and Co, was secretly funding the Japanese. This is the typical double cross style employed by the Jesuits and the Knights Templar before them in the Vatican’s divide and conquer strategy game.

In essence, the same strategy has been used in the United States with America drawn into a series of unpopular wars as part of the War on Terrorism. These illegal wars sponsored by the Deep State have generated a lot of antipathy toward the white ruling establishment of the United States. President Trump is getting the brunt of the blame when in fact the wars were waged during the illegal Bush and Obama presidencies. Neither one of these criminals had the right to be in office. One stole the election and the other, quite against the rules of the constitution, was not even born in America, as his birth certificate proves.

Interestingly, if this is correct, early 20th century communism and fascism were both fostered in the same country -Germany – the home of so many Elite secret societies and the birthplace of the Bavarian Illuminati founded by the Jesuit, Adam Weishaupt..

Similarly, we have the Vatican agent, George Soros, funding both sides in the artificially created American Revolution, which is being fomented exactly on the Centenary of the Bolshevik Revolution of 1917, with the so-called ANTIFA on one side and the Neo-Nazi far right groups on the other side, in the Holy Roman Empire’s continued bid to divide and conquer the people.

The monster, ‘communism’ was being created in order to foster the fear and mistrust presented as communism versus capitalism versus fascism. Once you have fear caused by two or more distinct sides, you have divide and rule. While Trotsky, Lenin, and their crowd were denouncing the capitalists, they were being financed by the London and New York bankers.

The Batman film, Dark Knight Rising, foresaw the coming revolution in America in typical predictive programming fashion. That is because the film was made by the orchestrators within the Deep State’s intelligence community to see how far their carefully laid plans would match their planning manual. The film depicts the release of prisoners from jail unleashed on the population to confiscate wealth, hold kangaroo-style court proceedings, show trails and imprison people en masse in FEMA-style detention camps.

Remember what happened in May 2017 Stateside at Evergreen State College in Olympia, where white people were ‘invited’ to leave campus for a day? If they were ‘invited,’ then why was the Caucasian Professor, Dr. Weinstein, being compelled and cajoled to leave? According to Professor Weinstein police told him to hold his classes off campus for safety considerations. This means that he was not politely ‘invited’ to leave, but being told to leave for his own personal safety. Things are “out of control at Evergreen,” Weinstein said. “Police told me protesters stopped cars yesterday, demanding information about occupants.”

In one of the most important posts ever shared on the Internet, George Freund of Conspiracy Cafe has discovered that the ANTIFA Manual has been found on Evergreen State College campus. There is no doubt that this manual is calling for the genocide of Whites Males and Jews, since Jews are depicted in the manual as the White Man’s masters. The Denver Airport murals, which are predictive programming related to the planned American Revolution and Holocaust, are starting to make a lot more sense as illustrated by the picture below. 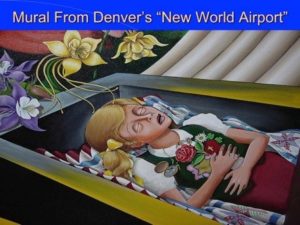 This Caucasian child, lying on and American quilt, hugs a Jewish star and Christian bible, divided by the red rose, symbolic of the Rosicrucians and the Illuminati, the Satanic organizations behind the planned genocide of whites, Christians and Jews. Notice also the flowers at the top left of the image is a Columbine blossom, suggestive of the Columbine high school massacre. 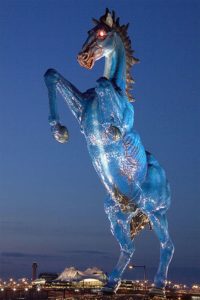