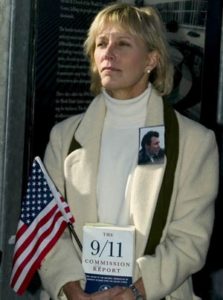 Beverly Eckert was murdered by Zionist operatives who were threatened by her relentless pursuit for justice regarding the death of her husband, Sean Rooney, whom she had loved dearly. Rooney had died a terrible, heart-rending death as WTC-2 collapsed around him and it was a truly horrendous event. Beverly was actually speaking on the phone with Sean, who was trapped in the building, and while she was speaking to him, saying a tearful goodbye, he died in the collapse.

In her own words, she said… “I guess I wish I wasn’t here, because it was such a different life before September 11th. I never envisioned myself speaking to the public having to say anything other than about my own little life. I was just like everyone else, very complacent, very content. World events didn’t seem to affect me, that’s what I believed at the time. All that changed on September 11th, and I guess I just found that I couldn’t just sit back and be a victim. I hate that word. I guess we’re always called victims’ families and things like that. I hate that term, what it conveys is helplessness and no control. I think it’s just been part of my healing process to see if I can make something good happen out of all this.

My husband Sean worked in the South Tower, his office was on the 98th floor with a couple of hundred other people and he didn’t really have a good understanding of evacuation and escape options and so they went up, only to find that the doors were locked. They had a window of opportunity to escape down Staircase A, there were three staircases in the South Tower. I think they thought that the rooftop was an option, and so they went up and they were trapped because the roof doors were locked. And I heard from him, he called me and was able to get through to me so I was one of the very lucky family members, I was able to say goodbye. I know what happened to him, I know what his last moments were like. He was very brave. He was a hero. So I have a legacy that I have, that I thought just to take his strength and try to do something positive with it. He was a really strong individual his whole life and I’m kind of feeling infused with that now. I’m trying to make a difference. I’m trying to find the truth in all this chaos.”

Beverly had also issued this statement…

“My Silence Cannot Be Bought

I’ve chosen to go to court rather than accept a payoff from the 9/11 victims compensation fund. Instead, I want to know what went so wrong with our intelligence and security systems that a band of religious fanatics was able to turn four US passenger jets into an enemy force, attack our cities and kill 3,000 civilians with terrifying ease. I want to know why two 110-story skyscrapers collapsed in less than two hours and why escape and rescue options were so limited.

I am suing because unlike other investigative avenues, including congressional hearings and the 9/11 commission, my lawsuit requires all testimony be given under oath and fully uses powers to compel evidence.

The victims fund was not created in a spirit of compassion. Rather, it was a tacit acknowledgement by Congress that it tampered with our civil justice system in an unprecedented way. Lawmakers capped the liability of the airlines at the behest of lobbyists who descended on Washington while the September 11 fires still smouldered. And this liability cap protects not just the airlines, but also World Trade Center builders, safety engineers and other defendants.

The caps on liability have consequences for those who want to sue to shed light on the mistakes of 9/11. It means the playing field is tilted steeply in favour of those who need to be held accountable. With the financial consequences other than insurance proceeds removed, there is no incentive for those whose negligence contributed to the death toll to acknowledge their failings or implement reforms. They can afford to deny culpability and play a waiting game.

By suing, I’ve forfeited the ‘$1.8 million average award’ for a death claim I could have collected under the fund. Nor do I have any illusions about winning money in my suit. What I do know is I owe it to my husband, whose death I believe could have been avoided, to see that all of those responsible are held accountable. If we don’t get answers to what went wrong, there will be a next time. And instead of 3,000 dead, it will be 10,000. What will Congress do then?”

Eckert was one of the few surviving relatives who refused to accept the ‘hush money’ offered by Kenneth Feinberg and took her own action, ultimately leading to the White House and beyond. She sought only justice for her husband and in so-doing publicly referred to the Zionist-orchestrated Project for the New American Century, as the “most sinister” of all documents she had ever seen. Eckert had gathered evidence that former President Bush knew all about the attacks in advance and had even contributed to the planning of them. Because of her relentless activism she was ‘allowed’ to meet with Barack Obama, informing him that she would not rest until justice was served, and also demanded that George Bush be investigated for conspiracy and complicity in mass-murder.

Less than a week later, Beverly Eckert was dead.

She had met with Obama in 2009 at the White House asking him to open a new 9/11 investigation. Obama shook her hand on TV, then sent her on a ‘complimentary’ flight to Buffalo to celebrate her late husband’s 58th birthday anniversary. The plane crashed just 6 days after the meeting with Obama and Beverly Eckert was silenced forever.

The crash of Continental Express flight 3407 brought tragedy to the friends and family of all 50 victims, but for one family, grief struck for a second time. The plane was flying without cause for concern, but then it suddenly began pitching wildly and crashed. The slick media ‘experts’ claimed it was due to ice, yet the plane had powerful de-icing systems. Suspiciously, there was a strong FBI presence at the crash scene. The FBI only investigates cases where the NTSB has determined that ‘foul play’ is involved. They stated that criminal action was ruled out, yet their presence proved otherwise.

This suggests that they knew there was foul play and that their only purpose at the scene was to enact a cover-up operation. The forensics team was led by the same man who led the forensics recovery efforts for Flight 93 in Shanksville. This man was a FEMA operative who had also worked with the UN on the crash of Egyptian Airlines 990 (another black-op.)

Was he considered a ‘safe pair of hands,’ for dealing with these incidents?  Nothing ever changes.