The Nazi financier-cum-US Secretary of Defence, James Forrestal had close ties with the Harriman family and had long been a partner and president of Dillon, Reed and Company, both leading financiers of the Third Reich.  In 1944 when, as Secretary of the Navy, he had proposed the racial integration of the US Navy, his fellow-pillars of American society must have suspected he had gone crazy and then later, as the nation’s first ‘Defence Secretary,’ after the War Department was renamed, he confirmed everyone’s worst fears by pressing for full racial integration of the armed forces, which must have made the Harrimans, the du Ponts, the Bushes and all the other bankster elite quite nervous.

Forrestal was also in conflict with other members of the Truman regime over military budgets and was the most outspoken opponent of the creation of the state of Israel, a position which sharply conflicted with ruling class plans for domination of the oilfields of the Middle East using Israel as a military proxy in the region.  Forrestal became convinced that he was being followed and that his phone was tapped.  He was correct.

On the 28th March 1949, Forrestal was forced out of office and flown to Florida where he was detained at Jupiter Island, a high-security enclave of the bankster elite, including the Harrimans, Mellons, Dillons, Bushes et al, and where fellow Nazi-financier and terror-bombing advocate Robert Lovett and an army psychiatrist attended to him.  He was then flown back to Washington, locked in Bethesda Naval Hospital and given insulin shock treatments for ‘mental exhaustion.’  Forrestal told his wife that he did not expect to leave Bethesda alive and all requests to see his brother, one particular friend and two priests were denied.  Indeed, one priest attempted to visit him on seven separate occasions and was turned away each time.  The naval authorities admitted only selected government officials, Forrestal’s estranged wife and his son who had, by coincidence, been Averill Harriman’s aide.

After threatening a lawsuit, Henry Forrestal was finally permitted to see his brother who had gained twelve pounds since his admission to Bethesda and reported that James Forrestal was “acting and talking as sanely and intelligently as any man I’ve ever known,” and made arrangements to remove his brother from Bethesda on 22nd May.   However, a few hours before his brother was due to remove him from Bethesda, James Forrestal’s body was found with his bathrobe cord tied tightly around his neck, after he had apparently ‘jumped’ from a sixteenth-story kitchen window.

Why a ‘patient’ who was said to be suicidal would be placed on the sixteenth floor of a hospital with unsecured windows and why he would be allowed to retain so classic a suicide device as the cord of his bathrobe are mysteries which will doubtless remain forever unsolved.  A hint, however, came from Forrestal’s doctor, who said that he was ordered by “the people downtown” to house Forrestal on the sixteenth floor, whilst he had wanted to put his patient on the ground floor of a nearby annexe.  Forrestal apparently left a ‘suicide note’ which was later discovered not to be in Forrestal’s own handwriting.

Apparently, Forrestal had an interesting new companion on the night of his death, a naval man named Robert Wayne Harrison, Jr. who had replaced Forrestal’s usual guard, and who had conveniently gone AWOL.  Harrison claimed that Forrestal had sent him out on a ‘brief errand’ and that during this time Forrestal had killed himself.

The chief psychiatrist at Bethesda immediately labelled Forrestal’s death a suicide and the Montgomery County coroner rushed to concur before any investigation had been conducted.   Since the death occurred on US Navy premises, no police investigation was ever undertaken.  An official Navy Review Board completed hearings on Forrestal’s death on the 31st May but waited until the ‘dust had settled’ and on the 12th October released a heavily-censored summary consisting of only a few lines.  The version of Forrestal’s death promulgated by the mass media is, in a nutshell, that Forrestal went insane and killed himself.  All very convenient, I am sure you agree.

In 1966, ‘The Death of James Forrestal,’ by Cornell Simpson, was published, raising serious questions about Forrestal’s ‘suicide.’  Inevitably and true to form, the book was almost totally ignored by the mainstream media.  But in 2004, after a long battle with the National Naval Medical Center under the Freedom of Information Act, a researcher finally obtained a copy of the long-suppressed report of the Navy Review Board.  The report did not even conclude that Forrestal committed suicide merely that he died from falling sixteen storeys, which again is unsurprising.  Neither did it mention the much-reported suicide note.

What the report did say however, was that an eyewitness saw broken glass on the bedding in Forrestal’s room.  Since he allegedly jumped out of the kitchen window, that testimony flatly contradicts the suicide theory.  The report also contained statements from Forrestal’s doctors that, contrary to the rumours which were widespread at the time, he had never attempted suicide.

Earlier in his career, Forrestal had been a bankster team-player, explicitly following orders and by way of (very) small compensation, he had an aircraft carrier named after him and an unusual comment on his tombstone which reads, in effect that he died, “In the great cause of good government.”  The banksters do like to have their little jokes. 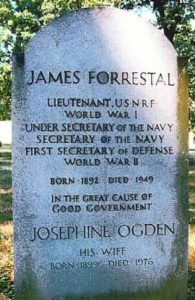 Of course, it goes almost without saying that the media vilified Forrestal for opposing the creation of Israel and Truman’s pro-Red, foreign policy and the venom continues to this day in Zionist circles, which characterises him, as is their custom, as an ‘anti-Semite’ and a ‘nut.’

“For secret assassinations… the contrived ‘accident’ is the most effective technique.  When successfully executed, it causes little excitement and is only casually investigated.  The most effective accident… is a fall of 75 feet or more onto a hard surface.  Elevator shafts, stair wells, unscreened windows and bridges will serve.  The act may be executed by sudden, vigorous grabbing of the ankles, tipping the subject over the edge.”  Extract from the CIA Assassination Manual, released under ‘Freedom of Information.’