“There are two world histories. One is the official and full of lies, destined to be taught in schools, the other is the secret history, which harbours the true causes and occurrences.” Honore de Balzac 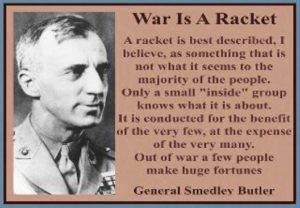 Throughout history, various men of military standing have spoken-out against the actions of the military hierarchy. Some have exposed the atrocities that have been covered-up, whilst others have revealed the deceptions that have been used against the public or actions that have been taken that are contrary to what they view as moral principles. Major-General Smedley Darlington Butler is one of the most prominent, high-ranking servicemen who has publicly opposed the actions of the military in which he formerly served.

Marine General Butler is also one of the most highly-decorated military men from the pre-World War II era. Twice a US Medal of Honor recipient, he served from 1898 to 1931 and saw action all over the world. Eventually he became a prominent political figure and was one of America’s most important leaders of the liberal movement of the 1930s. Butler advocated military isolationism and was totally against American involvement in World War II. His isolationist views are certainly unpopular today and in fact are incompatible with the current geopolitical ‘norm’ and were developed from his 33 years of service as what he referred-to as “…a gangster for capitalism.”

In total, Butler delivered over 1,200 speeches in over 700 cities during his speaking tour of the United States and in 1935 published his pamphlet ‘War is a Racket,’ which divided opinion hugely at the time of its publication, as it still does to this day. The foreword by Lowell Thomas spoke of Butler’s “moral as well as physical courage” and noted that “Even his opponents concede that in his stand on public questions, General Butler has been motivated by the same fiery integrity and loyal patriotism which has distinguished his service in countless Marine campaigns.”

What Butler fought so hard for was to take the focus off of moral and ideological arguments for war and concentrate on the geo-political factors that actually motivated war. He tried to raise awareness of what the real motivating factors of war were, as well as its usual dire consequences and indeed was one of the first soldiers to really bring the economic implications of war to the forefront of the public conscience. 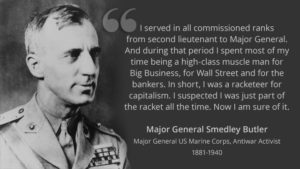 In War is a Racket, (which by the way is still in print and available to buy on the internet) Butler exposes in wonderfully blunt detail how the American ‘military machine’ was used exclusively to the benefit of wealthy American industrialists and banksters. He noted how proponents of war typically call on God as a supporter of the cause and how they embellish the mission as one of liberation and the spreading of freedom, but that these people tend to shy away from discussing the economic details of military ventures.

“War is just a racket. A racket is best described, I believe, as something that is not what it seems to the majority of people. Only a small inside group knows what it is about. It is conducted for the benefit of the very few at the expense of the masses.

I believe in adequate defence at the coastline and nothing else. If a nation comes over here to fight, then we’ll fight. The trouble with America is that when the dollar only earns 6 percent over here, then it gets restless and goes overseas to get 100 percent. Then the flag follows the dollar and the soldiers follow the flag.

I wouldn’t go to war again as I have done to protect some lousy investment of the bankers. There are only two things we should fight for. One is the defence of our homes and the other is the Bill of Rights. War for any other reason is simply a racket.

There isn’t a trick in the racketeering bag that the military gang is blind to. It has its ‘finger-men’ to point out enemies, its ‘muscle-men’ to destroy enemies, its ‘brain-men’ to plan war preparations, and a ‘Big Boss,’ Super-Nationalistic-Capitalism.

It may seem odd for me, a military man to adopt such a comparison. Truthfulness compels me to. I spent thirty-three years and four months in active military service as a member of this country’s most agile military force, the Marine Corps. I served in all commissioned ranks from Second Lieutenant to Major-General and during that period, I spent most of my time being a high class muscle-man for Big Business, for Wall Street and for the Bankers. In short, I was a racketeer, a gangster for capitalism.

I suspected I was just part of a racket at the time. Now I am sure of it. Like all the members of the military profession, I never had a thought of my own until I left the service. My mental faculties remained in suspended animation while I obeyed the orders of higher-ups. This is typical with everyone in the military service.

I helped make Mexico, especially Tampico, safe for American oil interests in 1914. I helped make Haiti and Cuba a decent place for the National City Bank boys to collect revenues in. I helped in the raping of half a dozen Central American republics for the benefits of Wall Street.

The record of racketeering is long. I helped purify Nicaragua for the international banking house of Brown Brothers in 1909-1912. I brought light to the Dominican Republic for American sugar interests in 1916. In China I helped to see to it that Standard Oil went its way unmolested.

During those years, I had, as the boys in the back room would say, a swell racket. Looking back on it, I feel that I could have given Al Capone a few hints. The best he could do was to operate his racket in three districts. I operated on three continents.”