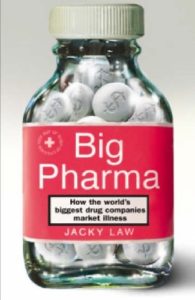 How is it possible to ‘invent’ a disease – or a syndrome to be more accurate? The answer is quite simple. When you have the financial muscle and the powerful propaganda machine that the kind of extreme wealth enjoyed by Big Pharma can buy, it is fairly straightforward to convince millions that several hitherto unrelated symptoms when ‘grouped’ together comprise a new illness, disease or syndrome. Indeed this is exactly the case with AIDS / HIV but as that issue has been covered in another article let us concentrate on other examples.

Psychiatry itself admits “it has not proven the ‘disease theory’ or the cause or source of a single mental illness it has classified and the theory of a chemical imbalance in the brain causes mental illness has been thoroughly discredited by the psychiatric industry itself” mainly because critics pointed out that there isn’t even a test for a chemical imbalance, it is complete nonsense. They say psychiatry is the ‘original pseudoscience, medical fraud and completely made up’.

When one delves beneath the surface at the specialty of psychiatry, what is uncovered is so ludicrous it is difficult to believe that it is really true. Prominent psychiatrists from all over the world gather annually for a meeting at which new diseases are invented. There are no objective findings that establish the diagnosis of these diseases. These new diseases are included in the Diagnostic and Statistical Manual of Mental Diseases. Potential new diseases are discussed at these meetings and new diseases are voted in or out by a show of hands, believe it or not.

Among recently ‘approved’ new diseases are social anxiety disorder (everyone who has ever felt uncomfortable in a social setting has this disease) and mathematics disease (anyone who has struggled over a maths problem has this disease). Gender identity disorder, passive-aggressive disorder, disorder of written expression and sexual disorder are other examples of invented diseases that will follow the individuals tagged with these ridiculous diagnoses the remainder of their lives. Naturally, all these completely fake diseases have a psychoactive drug, which supposedly ameliorates this disease, complete with a usually impressive price tag of course.

This may all be laughable but unfortunately it has serious consequences. When a child is diagnosed with depression as they are now increasingly, the child is often placed on a potent anti-depressant drug. The manufacturer of one of these leading drugs knew for many years that the drug caused loss of the ability to control violent behaviour, thus increasing violence towards self (suicide) and others (mass murders). This information was covered up because it would have negatively impacted upon sales of the drug. Nearly every teenager involved in the many recent school shooting rampages was taking an anti-depressant drug. There is a major fundamental flaw in a system more concerned about sales of drugs than the welfare of its children, but this we know already.

Another subtle ploy is to artificially set a limit on the incidence of certain parameters within the human body and then declare that anything above (or below) that limit is a cause for concern and/or a danger to our wellbeing. By that method it then becomes a simple task to produce a drug that ‘cures’ that imbalance and makes millions for Big Pharma.