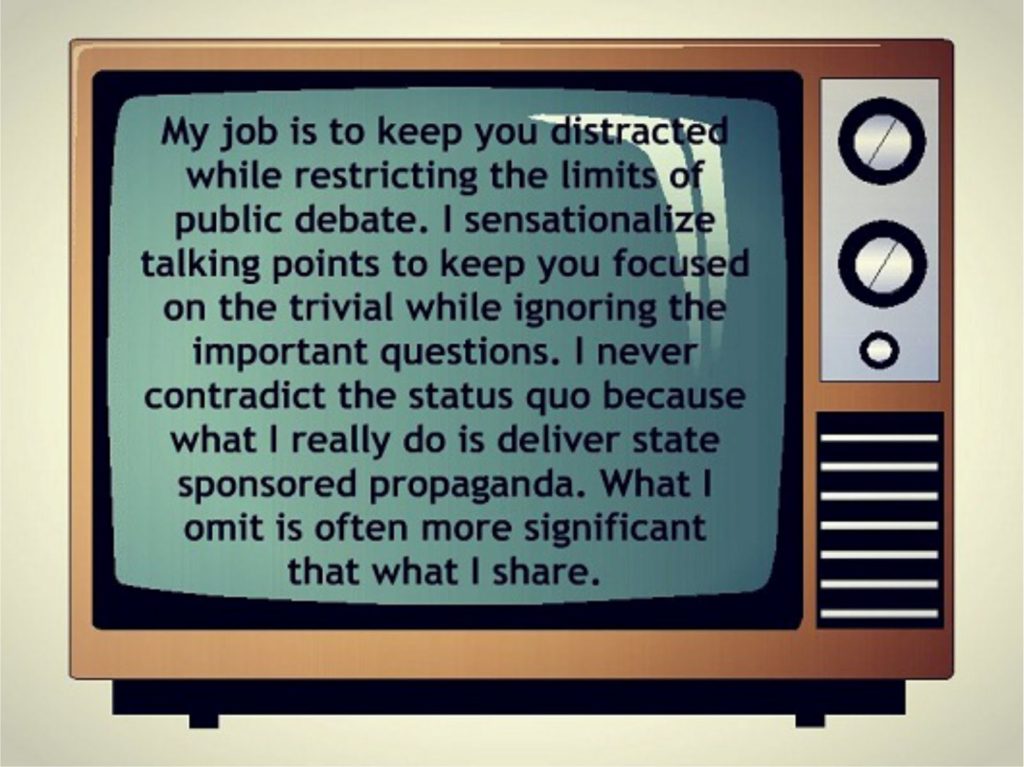 With the advent of the popularity of television in the 1930s and 1940s, for the first time in history, the banksters had an instrument through which the masses could be controlled effectively, immediately, and effortlessly. Television is by far, the most devastating brainwashing device ever unleashed upon humanity.

Ironically, the BBC, upon which Orwell modelled his ‘Ministry of Truth,’ and ‘Room 101,’ which was a conference room at its Broadcasting House headquarters in London, became one of the pioneers of television, the ultimate newspeak/doublespeak medium. When Orwell died in January 1950, there were only 100,000 TVs in Britain and 5 million in the United States. Today, there are almost as many TVs as there are people in the western world. 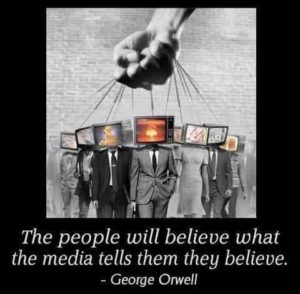 Most people do not realise that when they turn on the television in their home, what they see as a constant flow of images is actually flickering and although we do not recognise this consciously, the repetitive pattern of flickering images creates a state that is similar to hypnosis in the television viewer. Studies by researcher Dr. Herbert Krugman have shown that within 30 seconds of television viewing, brain waves switch from predominantly beta waves, indicating alert and conscious attention, to predominantly alpha waves, indicating an unfocussed yet receptive lack of attention. The brain’s left hemisphere, which processes information logically and analytically, tunes-out whilst a person is watching TV, whilst the right hemisphere of the brain, which processes information emotionally and non-critically, is allowed to function without hindrance. Due to this phenomenon, television transmits information, which is not actively recognised at the time of exposure, much like hypnosis and therefore when viewing TV, we do not consciously rationalise the information at the time of transmission and we become more open and suggestible. Because of this passive, hypnosis-like viewing of television, as well as its predominance in our homes, television is one of the most powerful tools of control, today.

As of 2015, only five companies controlled all of the major media outlets (of all forms) in the United States. That represents a very small number of people controlling all of the information that streams into millions of homes across America each day, through their TVs. In recent years, a number of investigations and exposés have revealed that these giants silence independent voices and investigations, discourage journalism that interferes with the agendas of corporate interests, and actively seeks to eliminate diversity in the information provided. Because of the control that these companies have over the information that most people receive on a daily basis, these criticisms and revelations are never learned by most.

The media giants work hand and glove with our bankster-controlled governments as well as multinational corporations to disseminate carefully planned messages. Through television and other forms of media, they instruct us in what to think, what to worry about, what to laugh at and what to be scared of and have completely ‘sold’ the public on the idea of the newscaster being an extension of the family, a trusted father-figure who encourages the acceptance of the information being presented as true and accurate. In 2012, the Pentagon spent more than $3 billion compensating major media outlets for disseminating their ‘public relations’ messages which are deceptively presented to the television viewer as news, produced by the television station, not as propaganda from the Pentagon. In the same year, pharmaceutical companies paid television outlets more than $5 billion for advertising, which included Video News Releases (VNRs,) specially tailored pieces that appeared within the nightly news disguised as being the result of research by the local stations. No other industrialised nation in the world even allows drug ads on television, let alone these cleverly disguised VNRs hidden within the ‘news.’

The public has been totally duped into placing all their trust into the major media outlets, believing that the mainstream media reports only strictly objective news, whilst any information delivered from alternative sources should always be questioned. Somehow the public has bought into the idea that the TV would never lie to them and many people will not pay any regard to information that is not covered by the major media. This is the mind-set that the banksters need us to have, in order that we become separated from the truth whilst remaining obedient to their every whim.

Most people simply believe that they are just being informed or entertained, but they do not realise that their way of life is being shaped for them and their opinions are actually being given to them. They are being familiarised with ideas, concepts, and fear so that they will not question future events. Through the subtle use of propaganda, TV imprints messages in our minds, instructing us in what to believe and how. But why would they do this?

Information is power. When someone or something controls information, they also control the people absorbing that information. The manufactured and controlled information on TV could be referred to as the ‘signal’ and that constant signal is what shapes and guides the masses to form their ‘own’ conclusions. In order to take back our minds, we must first learn to unplug the signal and by turning off our TVs, will realise that the world is suddenly a very unfamiliar place. News of no consequence or importance is constantly debated, dissected and analysed, and as we listen-in to the conversations of people around us, we will thereby realise that most are simply ‘robots,’ repeating as fact what they have heard on the news or in ‘documentaries.’ This is exactly what bankster-puppet Zbigniew Brzezinski referred-to in his book ‘Between Two Ages,’ in which he said, “Shortly, the public will be unable to reason or think for themselves. They’ll only be able to parrot the information they’ve been given on the previous night’s news.”

Today, the average person in the western world, over the age of 2, spends more than 34 hours a week watching live television, plus another three to six hours watching recorded programmes. Staggering really. Children aged 2-11 watch an average of 24 hours of TV a week. That number dips to 22 hours for teens, ages 12-17 then, goes back up to 25 for 18-24 year-olds. After that it rises steadily until people over 65 average 48 hours a week, or nearly seven hours a day. And we wonder why no-one can grasp or is even interested in what is really happening in the world today?

Television in fair and balanced hands, could have become one of the best things to ever enlighten mankind. A means to both inform and inspire but instead, it has been developed as both a weapon of mass distraction, deception, and destruction! A weapon that the Zionist banksters have owned and controlled from the very beginning. Everything it broadcasts, is from a Zionist perspective. From sitcoms to social dramas, from so-called educational documentaries to the nightly news… a Zionist perspective that is always hidden behind an innocent Jewish front.

Please do not misunderstand my motives, however. The simple truth is that Jewish people are indoctrinated from childhood just like everyone else, except in Israeli schools, they are taught to hate their Arab neighbours, and to despise Islam and Christianity. They are taught that those that dare speak-out against Israel are ‘anti-Semitic.’ To them, Israel is either a hero or a victim, never a bully or an aggressor. If only they knew and understood, that the founders of their beloved state, were brutal, cowardly terrorists, who liked to masquerade as Arabs whenever they felt like bombing or assassinating.

No, television has never ‘helped’ the Palestinian, Islamic people, or even the Jewish people, but it has made the Zionist’s job to fool everybody, very easy. As a result, you never, ever see on TV, anything that is critical of the banksters, Israel or Zionism and if you do hear even a slight piece of truth, it is usually labelled as anti-Semitic or ‘hate speech,’ and dismissed immediately. There is no open debate on the holocaust, Eisenhower’s death camps, the Zionist-Jewish control of everything, unlawful taxation, the creation of money, wars, you name it… You will never see any truthful documentaries about the firestorm holocausts of Hamburg and Dresden, the nuclear holocausts of Nagasaki and Hiroshima or the Rhine Meadows killing-fields or indeed anything at all that does not show Nazi Germany in a bad light and/or the Allies in a good light – period! Truth and freedom of speech is not the purpose or remit of television, radio or newspapers, or indeed any other means of mass communication.

Television is first, second, third and lastly… all about control of the masses.