The banksters certainly love war and the massive debts it creates for nations and thus by extension therefore, the correspondingly massive profits it makes for them. Indeed, their insatiable lust for these profits knows no bounds. The establishment of the banksters’ Federal Reserve Bank in the United States in 1913, coupled with their numerous other central banks throughout the world and the control they exert over the media in all forms, provided them with the unchallenged ability to steal from virtually every human being on the planet with absolute impunity and without regard to consequences.

In order to counter any question, debate or opposition to the Zionist banksters’ crimes, they simply made it a hate-crime or deemed it ‘racist,’ to even discuss them. In fact, they pre-empted the whole issue by creating the Anti-Defamation League of B’Nai B’rith (ADL) in the months prior to the launch of the Federal Reserve Bank in order to intimidate and condemn anyone speaking out against the Zionists. Anyone deemed to be a threat is thereby automatically regarded by the masses as someone who is attacking and threatening ALL Jewish people. ‘Anti-Semite,’ is the accusation and this is the perfect alibi and the perfect defence against criticism of any kind. 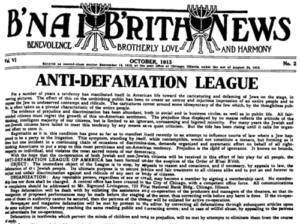 The ADL was founded by a Chicago lawyer, Sigmund Livingston in response to the 1913 murder/rape trial of Leo Frank a middle-class Jewish manager of a sweat-shop in Georgia who raped and murdered a thirteen year old, lower-class Gentile (non-Jewish) child worker. The prominent Jews who even at that time in American history were preparing for the total domination of American society by their own kind, were incensed that the goyim (a derogatory Jewish term for non-Jews) had the audacity to indict one of their own, for the crime despite that the fact that there a was a mass of evidence pointing to Frank’s guilt.

Considered one of the most sensational trials of the early 20th century, the Frank case seemed to tick every controversial box of the time, North vs. South, black vs. white, Jew vs. Christian, industrial vs. agrarian etc. During the century that has passed since, it has inspired numerous books and films, TV documentaries, plays, musicals and songs and has fueled legal debates, spawned a travelling exhibition and driven public forums.

It all began on Sunday, 27th April 1913, when the body of Mary Phagan, was discovered in the basement of her workplace, the National Pencil Company factory in Marietta, Georgia. Leo Frank, the northern US-born factory superintendent, was president of the Atlanta chapter of the Jewish secret society, B’nai B’rith. He was also a bisexual paedophile and a drug addict, who managed the factory and all evidence points to the fact that he demanded sex from 13-year old Mary and then when she resisted, he brutally raped and murdered her. 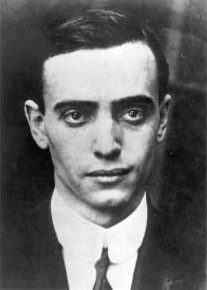 Frank and an illiterate black handyman, dragged the body to the basement where they were going to burn it in the factory furnace the next day but that same night a watchman discovered the body, called the police and after questioning, Frank was arrested, found guilty and sentenced to hang.

However, the governor of Georgia, John Slaton (who purely coincidentally, I’m sure, was the owner of the law firm that represented Frank) commuted his sentence. And so on 16th August 1915, twenty five men abducted him from his bed in a minimum security prison and lynched him in the early hours of the next day.

“Some viewed the commutation by Slaton as a conflict of interest, as Slaton was a law partner of Frank’s lead defense counsel. Slaton’s actions led to threats of mob violence against the governor, and the Georgia National Guard and local police were enlisted for protection. Fear of retaliation prompted Slaton and his wife to move out of Georgia after his term as governor ended. They did not return to the state for a decade.” Wikipedia™

In the aftermath of Frank’s murder, the Anti-Defamation League was formed and campaigned vigorously for a posthumous pardon. This was finally granted on a technicality, without establishing either his guilt or innocence in 1986. 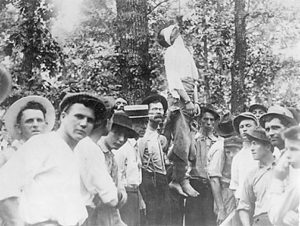 The lynching of Leo Frank

The Zionist ADL continues to exploit this incident to the maximum, to this day and Zionist-controlled Hollywood even produced a film in the 1980s, ‘The Murder of Mary Phagan,’ starring Jack Lemmon and a young Kevin Spacey, which presented a completely one-sided account of the incident, totally sympathetic to Frank’s innocence.

In those days lynchings were not uncommon, not just of blacks as we are deceptively led to believe, but also of whites too (mostly for rape). However, Leo Frank still remains the only Jew ever known to have been lynched in America and indeed he was the first white man to be brought to trial in the Deep South on a capital charge solely on the word of a Negro.

What was never revealed at the trial was that Leo Frank had ‘previous.’ One year before Mary Phagan was raped and killed, Frank raped and in the process, viciously bit another one of his child employees who conceived a child by him and was despatched to a home for unmarried mothers as a result of their brief but illegal and one-sided liaison. So, Frank was actually a sadistic paedophile whose case has been used as a stick for more than a century to attack, defame, slander, libel and generally hold to ransom, ordinary American non-Jewish ‘white’ citizens. This is the man that the Jewish community lied-about and is used by the Zionists, as their ‘martyr’ to anti-Semitism.

The conviction of Leo Frank was the impetus for the formation of the Anti-Defamation League of B’nai B’rith in October 1913, after the 500 member strong Atlanta B’nai B’rith voted unanimously on 24 September 1913, to re-elect their ‘wrongfully imprisoned’ President, Leo Frank to a second term as their leader. Frank ran the affairs of this B’nai B’rith chapter behind bars until September of 1914 but was not re-elected for a third term.

Ever since this sad incident, the ADL has been at the very forefront of perpetuating the hate-crime hoax by falsely claiming that people were shouting and chanting ‘hang the Jew’ and ‘kill the Jew,’ outside the open windows of the Leo Frank trial courtroom.

he charter of the ADL states that “The immediate object of the League is to stop, by appeals to reason and conscience and, if necessary, by appeals to law, the defamation of the Jewish people. Its ultimate purpose is to secure justice and fair treatment to all citizens alike and to put an end forever to unjust and unfair discrimination against and ridicule of any sect, or body of citizens.”

In fact the ADL’s true purpose is to protect the Rothschilds and the other banksters’ criminal network from exposure. Anyone who dares to call attention to the workings of the New World Order, or The Federal Reserve Bank, will immediately be denounced by the ADL as ‘anti-Semitic’ or ‘Jew haters.’ It is the ‘enforcement’ arm of the totally Zionist/bankster front organisation the B’nai B’rith, which was founded in 1843. B’nai B’rith in Hebrew means ‘Sons of the Covenant,’ and the covenant that God made with Abraham, the first Jew and afterward renewed with Moses, is the central theme and constitution of Judaism.