Having just won the British election by a landslide, the Labour Party’s Clement Attlee replaced the unpopular Conservative, Winston Churchill as Prime Minister, and attended the Potsdam Conference in July 1945 along with US President Truman and Josef Stalin of the USSR.

Now, the next phase of the banksters’ plan to impose their New World Order, was to about to go into effect. This was the ‘green light’ for the inexorable rise and rise of Zionism, and yet another reconfiguration of the world as it slowly began to take shape in the image that they desired.

In 1945, the British people had voted for ‘change’ and Clement Attlee’s Labour party had some very clear policies, which they enacted almost immediately. The Bank of England was ‘nationalised’ along with the railways, coal-mining, public utilities and much of heavy industry. This of course was all part of the banksters’ master-plan. A comprehensive welfare state was also created with the instituting of the National Health Service, entitling all British citizens to healthcare, which, funded by taxation, was free at the point of delivery. Among the most important pieces of legislation was the National Insurance Act of 1946, in which people in work paid a flat-rate of national insurance and in return, they were eligible for flat-rate pensions, sickness benefit, unemployment benefit, and funeral benefit. Various other pieces of legislation also provided for free education at all levels, child benefit and support for people with no other source of income.

Britain was in many respects unable to afford such radical reforms and the government had to cut expenditure. They began this by giving independence to many British oversea colonies, firstly with India in 1947 and Palestine, Burma and Ceylon during 1948-1949. Mass immigration at the Zionist-banksters’ behest was also about to begin, initially from the West Indies. Under the post-war Bretton Woods economic system, Britain had entered into a fixed exchange rate of $4.03 : £1.00 which optimistically reflected Britain’s sense of its own prestige and economic aspiration, but was badly judged (possibly intentionally) and hampered economic recovery. So, in 1949, Attlee’s government had little choice but to devalue to $2.80 : £1.00, permanently damaging the administration’s credibility. It was US bankster loans that would eventually re-build Britain.

It had become clear by early 1946, that Stalin had no intention of allowing the occupied nations of Eastern Europe to be set-free and on the 5th March 1946, the ex-Prime Minister, Winston Churchill, who indeed had greatly helped to engineer this disaster, delivered his famous ‘Iron Curtain’ speech in Fulton, Missouri:

“An iron curtain has descended across the Continent. Behind that line lie all the capitals of the ancient states of Central and Eastern Europe. Warsaw, Berlin, Prague, Vienna, Budapest, Belgrade, Bucharest and Sofia; all these famous cities and the populations around them lie in what I must call the Soviet sphere.”

Over the coming months and years, all of these nations, which had been ceded to Stalin at Yalta, one-by-one came under the influence of Soviet-backed Communist Parties in each nation, followed by the usual Red terror and torture tactics, aimed at the many dissenters. George Patton had been proven correct after all.

Then, with Britain weakened and in massive debt from the war, the opportunistic Zionists escalated their attacks against the British protectors of Palestine. It was the British who had stolen the nation for the Zionists’ sake, but now Britain was being betrayed and hounded out of Palestine. The bombing of the King David Hotel in Jerusalem targeted the offices of the British Military and it was the despicable Irgun terror gang, headed by future Israeli Prime Minister and Nobel Peace Prize winner (!), Menachem Begin, who was responsible for all the death and destruction.

Zionism has created a pincer-movement on the human mind by hijacking staggering amounts of political, corporate, banking and media power on one side and by using the fear of being accused of ‘anti-Semitism,’ should you dare to state the obvious. They have been able to do this by creating the general perception that Zionism is synonymous with the ordinary Jewish people. It is not. Zionism is a political creed introduced by the House of Rothschild to advance the New World Order goals of the bankster-illuminati families that are ultimately controlled by the Rothschilds.

Zionism means Rothschild means Israel. The three are all hand in glove, synonymous almost and when we see the extraordinary number of Zionists in key positions around the world, we are looking not at manipulative Jews, but manipulative Zionists, many of whom are non-Jews, representing the interests and demands of the Rothschilds, and indeed all the banksters.

According to Yitshaq Ben-Ami, a Palestinian Jew who spent 30 years in exile after the establishment of Israel, investigating the crimes of the “ruthless clique heading the internal Zionist movement,” the Irgun had conceived a plan for the King David attack early in 1946, but the plan had only been approved on 1st July. Allegedly, the operation was personally approved by David Ben-Gurion, from his self-exile in Europe. Sadeh, the operations officer of the Haganah, and Giddy Paglin, the head of the Irgun operation under Menachem Begin agreed that thirty-five minutes advance notice would give the British time enough to evacuate the wing, without enabling them to disarm the planted explosive device.

The motive was to destroy all evidence that the British had gathered, proving that the terrorist crime waves in Palestine were not merely the actions of ‘fringe’ groups such as the Irgun and Stern Gang, but were committed in collusion with the Haganah and Palmach groups and under the direction of the highest political body of the Zionist establishment itself, namely the Jewish Agency. That so many innocent civilian lives were lost in the ‘King David massacre’ is a normal part of the pattern of the history of Zionist outrages. The usual modus operandus is that a criminal act is committed, allegedly by an isolated group, but actually under the direct authorisation of the highest Zionist authorities, whether of the Jewish Agency during the Palestine Mandate or of the Government of Israel thereafter.

The King David Hotel, was an important social centre for those who could afford it. One wing was used by the Government Secretariat and the British Army and in addition to troops and Civil Servants, many Palestinian civilians worked there. The rest of the hotel operated normally with visitors coming and going in and out of the bar, restaurant and lobby. As a diversionary tactic, there was a smaller initial explosion in the street, which caused some alarm, but normality soon returned and the main explosion thereafter took everyone by surprise.

The larger bomb consisted of explosives packed into milk churns brought into the basement of the hotel by Zionist terrorists dressed as Palestinian Arabs. A British officer, Captain Alexander Mackintosh and a policeman who became suspicious, were immediately shot and killed but the alarm was raised and some of the terrorists were also shot and wounded but managed to get away and were hidden by some local Jewish sympathisers. The TNT exploded six minutes early at 12.37 pm and was devastating; the Secretariat wing collapsed as one floor fell on another and 91 people were killed immediately, British, Arabs, and 17 Jews, but many more were trapped and injured.

The Zionists claimed that warnings had been given, but bomb hoaxes were common occurrences at the time and terrorists often engineered the evacuation of a building so that people were then killed by another bomb strategically placed outside.

“The suction ripped off clothes, tore rings from fingers and watches from wrists. It sucked the windowpanes out of nearby buildings, spewing shards of glass into the street. Automobiles rolled over, small trees were uprooted, and cypresses and palms bent backward as if battered by hurricane winds. Ivan Phillips’ driver was blown onto the metal spears of the YMCA’s ornamental gate.” ‘By Blood and Fire,’ Thurston Clarke 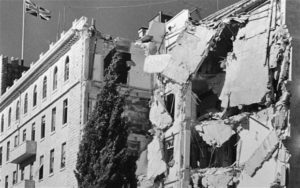 The team of bombers and gunmen was able to penetrate the King David’s security cordon with ease, however escaping the hotel proved problematic in more ways than one. Despite Begin’s insistence on the thirty-minute fuses and the telephone warnings, the Irgun was now saddled with the blame for the huge death toll. From Paris, Ben-Gurion denounced it as ‘an enemy of the Jewish people,’ by implication, the Palestinians. However, this was pure hypocrisy; the attack on the Hotel had been ordered by the Haganah, which was ultimately answerable to Ben-Gurion himself. Compared to Ben-Gurion, Begin was an unsophisticated, naive idealist.

And so, the Zionist terrorists framing of Arabs for such crimes had begun in earnest and has now become established as a Zionist trademark and common modus operandus – a fact which the Zionist-controlled and run, media and most governments never report or discuss, even to this day. In July 2006 Netanyahu and former Irgun gang members attended a 60th anniversary ‘celebration’ of this outrage, and still continue to claim that it was all the fault of the British and not the bombers.