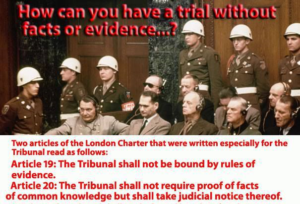 Never before – or since – has a defeated enemy in any conflict been convicted of so-called ‘war crimes.’

Robert Jackson, the chief US prosecutor at the Nuremberg Tribunal of 1945-46, privately acknowledged in a letter to President Truman, that the Allies “…have done or are doing some of the very things we are prosecuting the Germans for. The French are so violating the Geneva Convention in the treatment of German prisoners of war that our command is taking back prisoners sent to them for forced labour in France. We are prosecuting plunder and our Allies are practicing it. We say aggressive war is a crime and one of our allies asserts sovereignty over the Baltic States based on no title except conquest.”

Germans were executed or imprisoned for policies that the Allies themselves had implemented, sometimes on a far greater scale. German military and political leaders were executed based on a hypocritical double standard, which meant that these executions were essentially acts of judicial murder dressed up as due legal processes. If the standards of Nuremberg had been applied impartially, most other Allied military and political leaders would also have been hanged.

Oswald Spengler, the German historian and philosopher, once observed that people learn history through ‘political education.’ In every society, history is determined by those who control political and cultural life, including the educational system and the mass media. How people understand the past and how they view the world and themselves as members of society, is set by the agenda of those who hold ultimate power. This is why, in today’s society, all the death and suffering during and after WWII of non-Jews, Poles, Russians and others, and especially Germans is all but ignored and why, instead, more than seven decades after the end of the war, Jewish death and suffering and above all, what is popularly known as the ‘Holocaust™’ is given such prominent attention in our classrooms, documentaries and movies and by our manipulated and controlled political leaders.

The Nuremberg Trials were instigated in order to eliminate anyone in authority that was aware of the pact signed between the Zionists and Hitler in 1933 – but primarily to widely publicise and promote the Holocaust™ myths and legends by eliciting widespread sympathy for Jews and with a view to expediting the imminent foundation of the ‘illegal’ state of Israel.

When the trials began at Nuremberg, there were many ‘irregularities.’ For example, the accusers (including Soviet judges with long experience in Stalinist methods of the dispensation of ‘justice’) doubled as jurors and the court was as a result, never impartial from the outset. The accused were in fact deemed guilty before the proceedings began and the evidence presented was solely to provide ‘proof’ of guilt. The rules of evidence stated that the defence was not permitted to argue that the Allies had committed the same acts of which they were being accused.

Even so, the Germans were never tried for the indiscriminate bombing of civilians, because the Allies did not want to draw attention to the fact that it was they themselves that had instigated this particular ‘crime against humanity.’ And the highly creative charge of ‘waging a war of aggression’ was never defined either, because no definition would cover the German invasion of Poland and France without also covering the Allied invasions of Poland, Scandinavia and several other countries also.

The treatment of German prisoners of war was also a departure from the previous rules, which the Allies justified by arbitrarily declaring the captured German military officers to be civilians. This made them eligible for trial as criminals under the absurd new rules. The purpose of the trials was not to see justice done or to determine guilt according to normal standards of law but to give the Allies a propaganda victory in addition to their military triumph.

In essence, the Germans were convicted of losing the war. The only real ‘war crime,’ was being defeated. Admiral Erich Raeder, for example, was convicted for invading Norway, though he had simply arrived slightly in advance of the British, on the eve of their own planned invasion.

The whole thing was a shameful, contrived farce which set a precedent for the decades-long pursuit of ‘war criminals’ that continued until quite recently. The only reason that this incessant witch-hunt has now been wound-down is that seventy years after the event, most of the protagonists are now long-dead.

Allied crimes have never been acknowledged, except maybe as wartime necessities justified by noble ends and Allied criminals have never been brought to justice. Instead, they are still honoured as the ‘heroes’ of the twentieth century. Even the memory of the odious ‘Bomber’ Harris, long ostracised with distaste and moral embarrassment by the British Establishment for his rather unseemly enthusiasm for killing civilians, was honoured by the erection of a statue in London.

That the evidence used against the defendants was very dubious and obtained by even more dubious methods is very evident. An example of the techniques employed is described by the distinguished (yet now discredited) English historian, David Irving in his book, ‘Nuremberg: The Last Battle’…

“Garnering usable documentary evidence became a mounting nightmare for Jackson [the chief prosecuting attorney.] He had become disenchanted with the productivity and intelligence of General Donovan’s OSS. They had promised much but delivered little. What Donovan regarded as evidence, he certainly would not. ‘I never had any feeling that anybody had trapped me into the thing,’ Jackson commented later. ‘But I was in the trap!’”

It soon became clear that the OSS (CIA) intended to stage-manage the whole process along the lines of a Soviet-style show-trial, with Jackson engaged as the actor-in-chief. They proposed to run a pre-trial propaganda campaign in the United States with ‘increasing emphasis on the publication of atrocity stories to keep the public in the proper frame of mind.’ To this end the OSS devised and scripted for the ‘education’ of the masses, a two-reel film on ‘war crimes,’ called ‘Crime and Punishment,’ designed to demonise the leading Nazis. However, Jackson refused to read to the cameras the speech that the OSS had scripted for him. “As you know…” he wrote to the OSS officer concerned, “…the British are particularly sensitive about lawyers trying their cases in the newspapers and other vehicles of communication.”

The unsavoury methods of the OSS are evident among the earlier Nuremberg records. For instance, at the pre-trial interrogations the defendants were not represented by lawyers and were frequently persuaded by trickery or intimidation to incriminate others. The files are full of obvious chicanery of various kinds, for example anonymous, typed extracts of documents instead of the originals and sworn statements by witnesses like Höss, commandant of Auschwitz, in which witnesses to his signature have signed, but clearly not Höss himself. Indeed, it is well known that Höss’s confessions were all obtained by torture, specifically the agonising crushing of his testicles – at which point he agreed to say whatever they wanted, just so long as they would stop inflicting the excruciating pain upon him.

This is all of course only a very brief overview of the innumerable deficiencies of the ‘evidence’ presented at Nuremberg. The overwhelming Zionist-Jewish presence behind the scenes as prosecutors, judges, interrogators, jailers and torturers is fully documented and the examination of techniques employed, is more than sufficient to demonstrate that truth and justice were the very last objectives of the orchestrators of the trial.

The key point in evaluating Nuremberg is that all the evidence, real and faked at the trial, was in pursuit of a pre-determined verdict. It was regarded as desirable to demonstrate that the Germans were uniquely evil; that the Germans alone had waged aggressive, illegal war; that the Germans had committed vile ‘crimes against humanity’ and that the greatest of all their crimes was the alleged, yet still unproven, systematic extermination of six million Jews.

To reach these pre-determined verdicts, the court manipulated and distorted evidence on a massive scale and therefore, any honest assessment of WWII based on conclusions from Nuremberg is inherently flawed…

It is but another supreme example of the art of the re-writing of history by the victor.