On the 30th January 1945, with the murderous, rampaging Red Army bearing down on them, the German civilians of East Prussia, desperate to escape, fled to the Baltic ports hoping to be evacuated by sea.  Many of those caught in the maelstrom of the Soviet advance had already been murdered and raped. 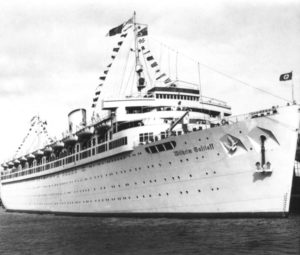 The Wilhelm Gustloff, along with many other serviceable ships, was pressed into service to aid the evacuation of German civilians from the Eastern zone.  With forty-eight hours’ notice before departure, there were scenes of chaos and blind panic in the frozen German port of Gotenhafen as people, frantic for a place, fought on the dock and surged aboard the ship.

Wilhelm Gustloff, weighing 25,000 tons and almost 700 feet in length, was an impressive sight, and could carry almost 2,000 passengers and crew.  Launched in 1937, it began its life as a luxury cruise liner for the German workers of Hitler’s Third Reich.  For the first year of the war she had served as a hospital ship before being held in dock in the port of Gotenhafen on the Baltic coast (modern-day Gdynia) where, until early 1945, it had served as barracks for U-boat trainees.

When the Gustloff left the relative protection of the harbour at Gotenhafen on 30th January 1945, the weather was extremely poor with a wind strength of 7, it was snowing, the temperature was minus 10 degrees Celsius, and there were copious amounts of sea-ice.  In short, the chances of human survival in water in those conditions were zero, with or without a life-preserver.  Once underway, the Wilhelm Gustloff began to battle its way through the choppy, blustery Baltic Sea, un-escorted and with its only protection being the few anti-aircraft guns it had on-board.  However, against a submarine attack the Gustloff was powerless.

According to the ships own records, the list of passengers on the 30th included 918 Naval officers and men, 173 crew, 373 members of the Woman’s Naval Auxiliary units, 162 wounded, and 4,424 refugees, an ‘official’ total of 6,050 people.  This however fails to take into account the many hundreds of other people that one way or another were able to make their way onto the seemingly safe haven of the Gustloff.  In fact, new research has now shown that the total number of people on the Gustloff at the time was actually 10,582 souls (40% of whom were children.) In their blind panic, they had crammed themselves onto a ship designed for less than 2,000 passengers.

When the captains (there were four on board) were informed of a German minesweeper convoy coming towards them, they decided, after much argument, to switch on the navigation lights to avoid colliding into the convoy, but by doing so the ship also became visible to a Soviet submarine lurking nearby. 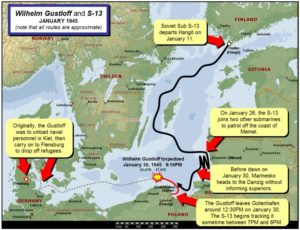 Then, at 9.08pm, the Soviet submarine S-13, commanded by Alexander Marinesko, hit the Gustloff with three torpedoes.  She immediately listed to starboard, righted herself, and then listed once again, launched rescue flares and broadcast an SOS message.  Less than 50 minutes later she was gone, sunk beneath the icy black waters of the Baltic, along with 9,343 men, women and children. Amazingly, 1,239 people were saved by the heroic and selfless work of a number of smaller German ships in the area but the losses were six-times greater than those of the Titanic.

When the Gustloff sank, it was an event unlike any in naval history, if for no other reason, because of the sheer scale of the tragedy.  Many ships have sunk with terrible loss of life, but never before or since have so many lives been lost on a single ship.  As with all maritime tragedies, the scene was one of absolute and complete horror.  The suffering of those on board the Gustloff was unspeakable and whether these people were ‘enemies’ or not is irrelevant, they were fellow human beings, the vast majority of them ‘innocents,’ i.e. non-combatants.  It was such a horrific loss of human life, and one of which even today, few people are aware.

Indeed, Marinesko deserves the epithet ‘war criminal,’ more than many other recipients of that label.  He knew very well that the Gustloff was an innocent refugee ship and this in my view typifies the disgraceful, inhumanity shown by the Soviets as a nation, despite their being portrayed as the ‘good guys,’ by the bankster-controlled media at the time.

The sinking of the Wilhelm Gustloff remains the greatest maritime disaster in history.  So why is hardly anyone aware of it and why has bankster-controlled and run Hollywood never made a movie of it?  This is of course a rhetorical question.  The answer is obvious and that is that Hollywood is run by the same group of people today as it was at that time and anything that hints at sympathy for Germans or paints its adversaries in a bad light, is always ‘brushed under the carpet,’ whilst anything to the opposite of those is constantly promoted and presented in a positive light.